One down, four to go 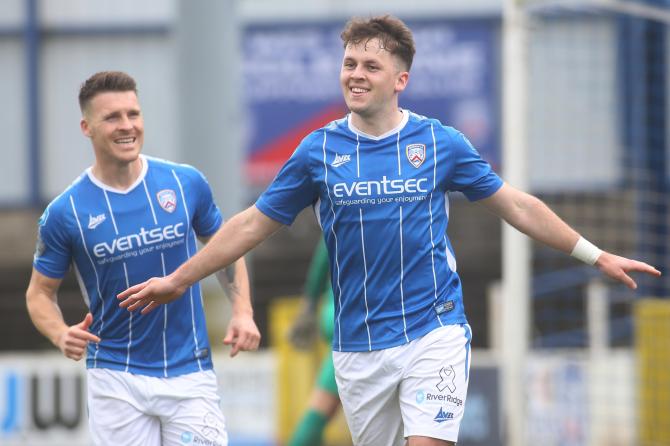 Ben Doherty scored two penalties in the win over Cliftonville.

BEN Doherty must have ice running through his veins.

Twice he was called on to step up from the spot in Saturday's 2-0 defeat of Cliftonville and twice he delivered under the most enormous of pressure.

For make no mistake, this was a crucial game.

Victory for Coleraine, who started the day in third place in the Danske Bank Premiership, would see them open a sizeable gap on their opponents and nearest challengers in fourth.

A win for Paddy McLaughlin's men, however, woud have seen the Reds close to within three points of their opponents with four games left of the season.

The stakes, therefore, could not have been higher, which only added to the importance of Ben's two penalties.

The first came in the opening 45 minutes when the energetic Matthew Shevlin fastened on to a ball over the static Cliftonville defence and got to the ball slightly ahead of visiting goalkeeper Aaron McCarey.

Shevlin managed to get his lobbed effort away before colliding with the big keeper but could only watch as his effort bounced off the top of the crossbar.

Referee Raymond Crangle, however, decided that the keeper had fouled the Coleraine striker and pointed to the penalty spot, much to the displeasure of visiting players and management.

Ben Doherty, Coleraine's leading scorer this season, took responsibility as he so often does in these situations, and made no mistake, beating McCarey with a well-placed effort into the corner of the goal.

He was at it again in the second period to secure maximum points for the home side.

Again, the incident which led to the penalty involved the same two players as previously - Matthew Shevlin and Aaron McCarey.

A long punt out of defence by defender Lyndon Kane appeared harmless enough as Cliftonville defender Kris Lowe seemed to have everything in control.

However, under pressure from the tireless Shevlin, he attempted a header back towards his goalkeeper.

The header lacked power and was immediately seized upon by Shevlin who cleverly nudged it past the advancing Reds' keeper.

McCarey collided with Shevlin, the striker going sprawling in the box.

Referee Crangle pointed immediately to the spot and to add insult to injury for the visitors showed the goalkeeper a red card.

Substitute goalkeeper Declan Dunne entered the fray, Garry Breen making way, but his first action was to lift the ball out of the back of the net as Ben Doherty rifled home his second penalty of the afternoon.

Two goals down and reduced to ten men, Cliftonville attempted to claw their way back into the game but this Coleraine team know how to see games out when in front.

They dealt comfortably with everything their opponents threw at them in the closing stages to hold on for what might be a very important three points come the final reckoning.