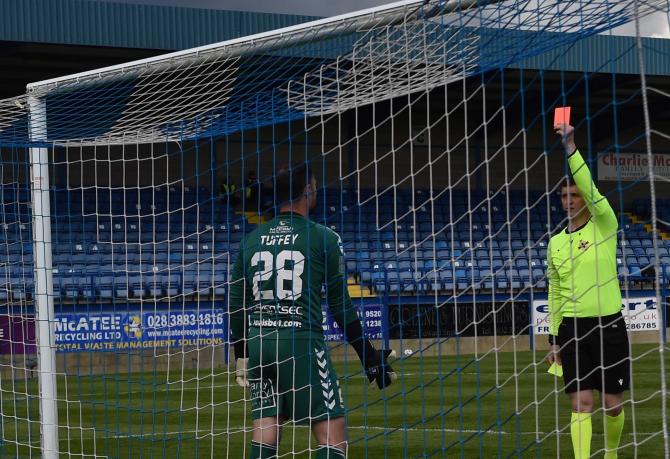 WE'VE all been involved in the game for a long time, but it's safe to assume that none of us have ever witnessed what we saw at Mourneview Park on Tuesday.

Even now, the morning after the night before, it's still hard to believe what actually happened.

Crusaders out of the Irish Cup, on penalties, after their keeper, who saved three of the spot-kicks, sent off by referee Shane Andrews.

We can argue until we're blue in the face about the officials' decisions but the bottom line, it appears, is that he was simply following the letter of the law.

It's believed, also, that the respective goalkeepers were informed of the protocols immediately prior to the penalty shoot-out which came at the end of an entertaining 90 minutes in which the teams couldn't be separated.

With that in mind, is it right that all the blame is being laid at the feet of the man in the middle? What about Crusaders' stopper Jonathan Tuffey? Should he not have changed his approach after being shown a first yellow card?

Perhaps, but it is such an unusual occurence - a keeper getting booked for not staying on his goal line - that none of us would ever have imagined seeing someone dismissed in such a fashion.

Whatever the rights and wrongs of the decision, and it is a discussion that seems sure to rumble on for some time yet, the bottom line is that Crusaders, with Billy Joe Burns donning the gloves, bowed out of the cup, beaten by Larne.

The Inver Park side - who have never won the trophy despite appearing in a number of finals - will play perennial champions Linfield in Friday's decider, again at Glenavon's home ground.

The Blues enjoyed a much more sedate passage into the decider, two goals from in-form striker Shayne Lavery helping them to a comfortable 3-0 win over a disappointing Ballymena Utd side.

David Healy's side will be targeting a 44th success in the competition this weekend in what he and his players will hope is the first part of a league and cup double.

They, of course, visit Coleraine Showgrounds on Tuesday in the penultimate round of games in the Danske Bank Premiership with the destination of the Gibson Cup still undetermined.