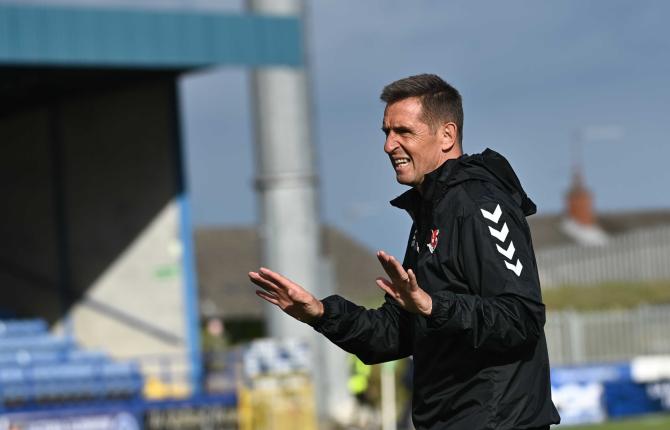 The showpiece occasion - to be played out in front of 1,000 supporters - had been cast into doubt after Crusaders FC officials had lodged a protest relating to their semi-final defeat to Larne on Tuesday.

The north Belfast club had goalkeeper Johnny Tuffey sent off during the penalty shoot-out after the game had finished level after 90 minutes.

He was shown two yellow cards by referee Shane Andrews after match officials believed the former NI stopper had moved off the goalline in saving a number of spot-kicks.

IFA officials met to examine the nature of the protest on Friday morning, just hours before the final was due to be held at Mourneview Park in Lurgan.

They released a statement on Friday afternoon saying that Crusaders' protest was dismissed.

"In reaching the decision, the committee took notice of advice provided by the Technical Director of the International Football Association Board in relation to the detail of the protest made by Crusaders FC," the statement said.

The final features Larne, going in search of their first success in the competition, and Linfield who are targeting a 44th Irish Cup triumph.

A win for David Healy's side would see them complete what they hope will be the first part of a league and cup double.

The Blues are five points in front of nearest challengers Coleraine with just two games of the league season remaining.

And, as luck would have it, the two teams are set to meet in the penultimate game of the campaign at Ballycastle Road on Tuesday night - in front of supporters!

A relaxing of restrictions by the NI Executive means that 500 fans will be permitted to attend the midweek fixture - all of them Bannsiders!

Tickets went on sale on Friday with queues forming from early in the morning, supporters clearly determined to get their hands on a ticket for arguably the club's biggest game of the season.

Oran Kearney's men, of course, still have a mathematical chance of lifting the Gibson Cup for only a second time in the club's history but the more immediate priority is European football for next season.

With a European place going to the winners of the Irish Cup it can be reasonably expected that most Bannsiders will be hoping for a Linfield win this evening.

Should that happen, then European qualification would all but be secured for Coleraine with the second and third finishing teams in the Danske Bank Premiership qualifying.

Coleraine currently have 69 points, with the home game against Linfield and a final day trip to Larne on Saturday to complete the league season.

More importantly, third-placed Glentoran are on 65 points and fourth-placed Larne on 64 points - with the two meeting at the same time as Coleraine and Linfield play on Tuesday.