Coleraine begin their 2021 season away at Larne on Friday night 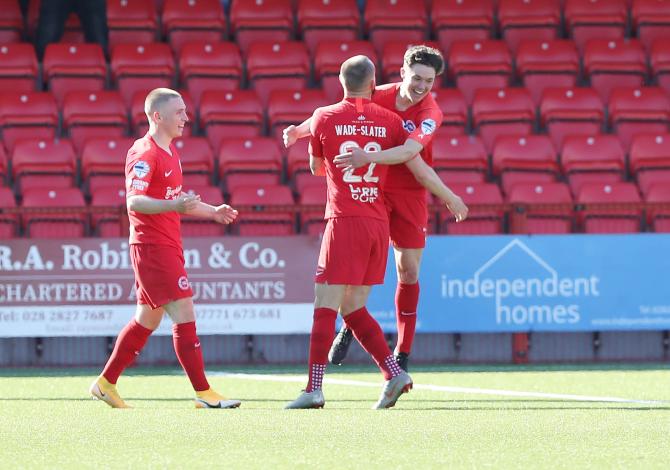 Conor McKendry, seen here on the left celebrating Matthew Lusty's goal against Coleraine in the last meeting of the clubs back in May, is now a Coleraine players with former Bannsider Ben Doherty movi

BANNSIDERS' boss Oran Kearney admits it will be tough for his players to replicate their heroics of last season when they finished best of the rest behind league champions Linfield, but that it won't be for the lack of trying.

Coleraine kick off their new campaign away at Larne on Friday evening, one of five successive away games for the north coast men as they wait on the construction of a new artificial surface at the Showgrounds.

The Inver Park side, of course, enjoyed a lengthy run in European competition earlier in the summer, much like their opponents this weekend did 12 months ago, and come into the game buoyed by a number of new signings.

They are one of a growing number of full-time clubs currently operating in the top division of the Irish League which makes the challenges facing part-timers such as Coleraine that much harder.

But, somehow, you get the sense that the boss is looking forward to once again upsetting the odds.

“We all know, if we're being honest, that we punched well above our weight last season to get to the level that we got to," admitted the Ballymoney man this week.

“We've got to punch again and punch even harder. It's gonna be harder this year because the competition is even more intense.

“The full-time teams – they have to have an impact on the league, they should have. That's probably the best way of looking at it and not in a defeatist sort of way.

“It's our job, quite simply, to make sure that we narrow that gap as much as possible and that's the key thing.

“We were able to do that last season and it was tough but we've got to try and do it again this season as best we can.

“That's what we've got to do this season again and, ideally, we've got to break that mould to ensure it doesn't finish statistically as it should," he added.

Coleraine's players enjoyed a couple of weeks off following their Europa Conference League defeat before returning to pre-season and a number of warm-up games.

The manager believes the squad is in a good place just days out from the big kick-off and, traditionally, they enjoy their visits to the harbour town.

They will go into Friday's game as underdogs, which will suit, and they certainly won't be overawed by their opponents.

All have settled in well since their arrival but it could be a homegrown talent who outshines the lot of them in the long run.

Portstewart teenager Patrick Kelly, known as 'PK,' is only 16 and has just completed his GCSEs but is tipped for a bright future in the game.

On the flip side, Coleraine have lost the goalscoring talents of midfielder Ben Doherty who will line out against his former team-mates on Friday after joining Larne.

Stewart Nixon has rejoined Larne after failing to cement a starting place at Ballycastle Road while Alex Gawne remains on loan at the Belfast Loughshore Arena.

Defender Aaron Canning, meanwhile, hasn't featured for the club in pre season while there are suggestions that others may leave the club to make way for a new arrival before the transfer window closes next week.

But, for the moment, all focus is on Inver Park on Friday in front of what promises to be as big a crowd as authorities allow under current Covid guidelines.

The visitors will be backed by 600 travelling fans as we finally return to something approaching normality after a miserable 18 months.

With the weather forecast indicating perfect playing conditions, the stage is set for a memorable start to a new Irish League season.