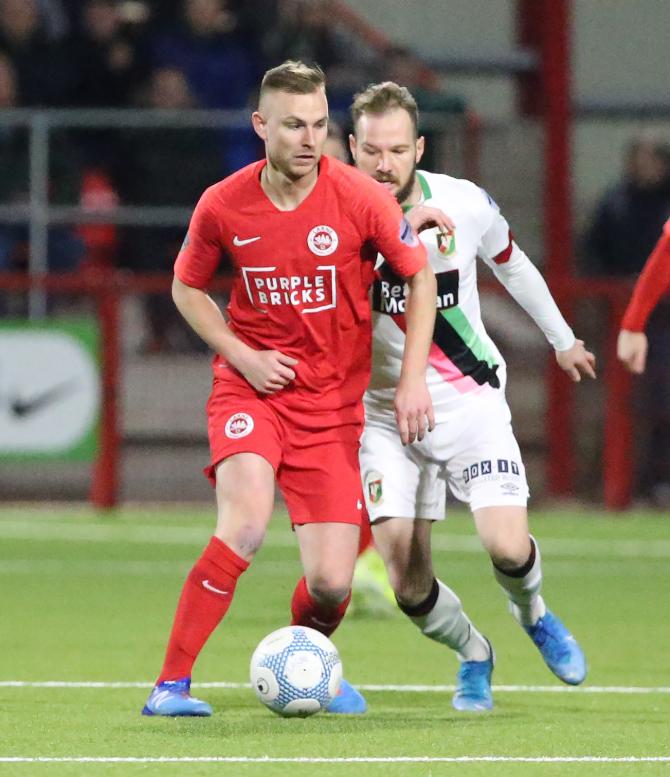 LARNE midfielder Andrew Mitchell has paid tribute to Coleraine manager Oran Kearney and his players ahead of this evening's season opener at Inver Park.

The teams meet in a mouthwatering clash as the Danske Bank Premiership returns - with fans - following a summer break.

Tiernan Lynch's side go into the game on the back of a superb run in Europe and having strengthened in the transfer market while Coleraine have enjoyed a more low-key close season.

The Bannsiders have also recruited, bringing in the likes of defender Rodney Brown and striker Cathair Friel, but are sure to go into the game as underdogs given Larne's full-time status.

However, Mitchell is long enough in the game to not dismiss opponents who finished runners-up to Linfield in the league last time out.

"Fair play to Coleraine, it's incredible what they do," said the well-travelled midfelder.

"I haven't played under him but he seems to have his players playing with their heart on their sleeves for him which is a great credit to him and his staff.

"Coleraine teams are always hard to play against no matter what team turns up, whether it's their strongest eleven or their weakest.

"You know what you're getting with Coleraine, they're a tough side.

"They always give you a game and it's going to be a really good encounter considering the games we've had in the past.

"They're always exciting games to play in and I think both sets of players love playing in them. Even the game at the end of the season – it was still a great game.

"But what a game to kick the season off and hopefully it's us that gets three points on the board," added the former Linfield man.

Coleraine defender Lyndon Kane, meanwhile, believes the Bannsiders' boss will have a gameplan designed to give the visitors the best chance of gaining a positive result from their trip up the coast road.

"Larne away is a challenge you relish, especially after the summer they've had," said the teak tough full-back.

"The money that they've spent, the resources that they have, it's difficult for us to compete.

"But it's somewhere we'll go with confidence in our abilities.

"The manager will have a gameplan, he'll set us up right and we'll go there and give it a crack.

"Oran has different game plans for different teams so we'll go there with total belief in his gameplan and believing that we can win," he added.