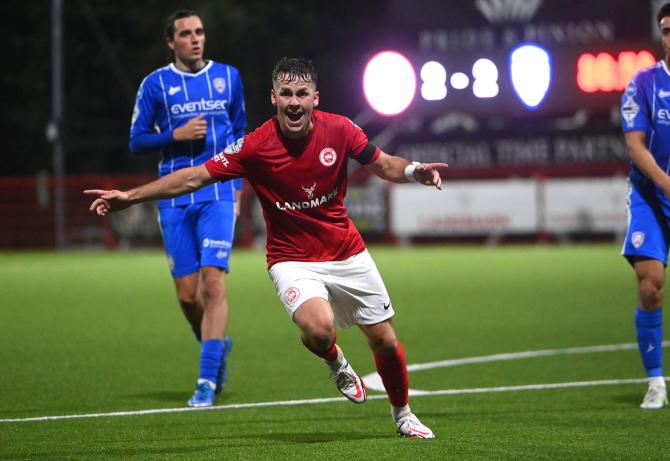 Yep, the Irish League is back - with a bang!

The only thing missing was some tangible reward for Coleraine from a pulsating game which kept the capacity crowd enthralled right to the end.

They certainly played their part in another classic between these teams but, for the first time in what seems like aeons, it was the Inver Reds which prevailed.

In fact, thanks to renowned football statistician Marshall Gillespie, you have to go back to January 1993 to find the last time that Larne defeated Coleraine in the league at their home ground.

So, does Friday night's result represent a shift in the balance of power between the two clubs - or was it just a case of Tiernan Lynch's side getting the breaks when they mattered?

I'm thinking particularly of the yellow card shown to striker Davy McDaid following his challenge on Coleraine wing-back Aaron Traynor in front of the dug-outs in the second half.

I have to confess I didn't see the tackle as I was writing on my I-pad at the time but a colleague who did see it insisted it was a red card offence.

The incident prompted a melee involving players and coaches from both teams and when the dust settled referee Andrew Davey showed a red card to respective assistant coaches Winkie Murphy and Tim McCann.

The pair go back a long way in the Irish League and it appeared they were quite keen to renew acquaintances as they made their way up the tunnel to the changing rooms.

Back on the pitch, the one-time Coleraine striker McDaid made the most of his good fortune to level the game at 2-2, a huge moment in the context of the game.

Larne had taken the lead in the opening 45 minutes through Kofi Balmer's headerr from a Ben Doherty corner and that was how it remained at the break.

But Coleraine came roaring back in the early stages of the second half and headed goals from Aaron Traynor and Matthew Shevlin had turned the game on its head.

Then came McDaid's equaliser, with many observers suggesting that he shouldn't even have been on the pitch to score.

The visitors were desperately trying to see the game out as the minutes ticked down but they couldn't hold out as Larne pressed for what would most likely be a winner.

Eventually the goal came and, unfortunately from a Coleraine perspective, from a familiar source - Ben Doherty.

The Derry man, who only moved clubs this summer, showed composure and skill to control the ball and volley low past Gareth Deane from the edge of the penalty area in the 88th minute to make it 3-2.

A popular figure during his time at the Showgrounds, the midfielder didn't endear himself to his former fans with his goal celebrations but, having taken stick during the game, he would argue that he was simply giving some back to his erstwhile friends in the Church End stand.

Sub' Lee Lynch added a fourth two minutes later to seal a 4-2 victory which, to this observer, seemed a tad harsh on Coleraine given the part they played in an entertaining game.

Make no mistake, the Irish League is back and we're all the better for it.

* For reaction and analysis of the opening game of the 2021/22 season, make sure and pick up a copy of The Chronicle on Tuesday morning.