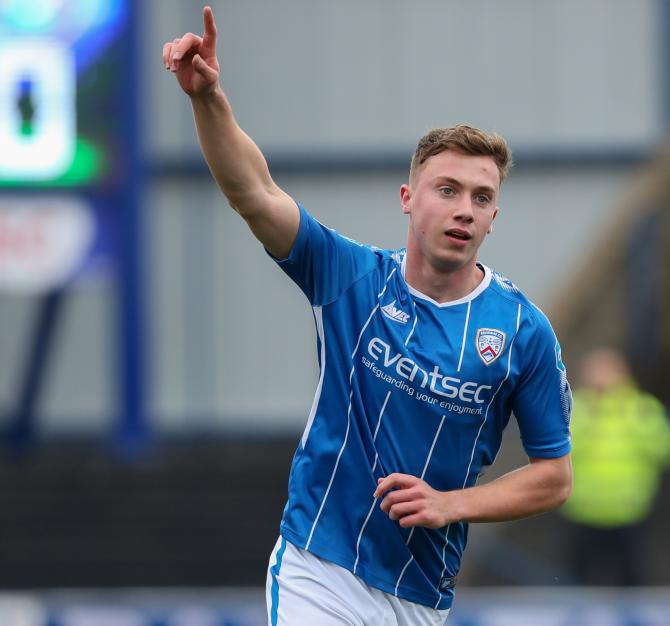 TWO goals - one in each half - from the in-form Matthew Shevlin secured the three points for Coleraine in Saturday's 2-0 defeat of Warrenpoint Town at the Showgrounds.

The former Ballymena Utd and Linfield striker scored early in each half to extend the Bannsiders' unbeaten league to eight games and send them up to third in the Danske Bank Premiership table.

In contrast, Saturday's reversal was the visitors' eigth successive loss since their only league win which came against Ballymena Utd on the opening day of the season.

The afternoon could have been more memorable for Shevlin but he wasted a glorious chance to complete his hat-trick when volleying over the crossbar when one on one with Town keeper Conor Mitchell in the latter stages of the game.

Nevertheless, Shevlin's brace makes it seven in the league for the Ballymena man and ten goals overall for Oran Kearney's side.

His first goal arrived after just minutes and was a well judged lob over Mitchell after he had got in behind the visiting defence.

His second was a much easier finish, getting on the end of an inviting Conor McKendry cross at the end of a sweeping Coleraine move to prod home from close range.

Shevlin and striker partner Cathair Friel both had goals ruled out for offside on an afternoon when Barry Gray's side lacked the necessary quality to penetrate a mean Coleraine defence.

The win sees the Bannsiders move on to 18 points in the league table, two points behind leaders Cliftonville who lost for the first time this campaign, 1-0 at Ballymena Utd, former Dervock player Kenny Kane on target for the Braid side.

Eleswhere, the pressure mounts on Glentoran and their manager Mick McDermott after they were held to a 2-2 draw at the Oval by ten-men Portadown.

On Friday, Dungannon Swifts recorded their second win of the season with a deserved 2-0 home win over Carrick Rangers.

Analysis and reaction in Tuesday's Chronicle.