Holders put their trophy on the line 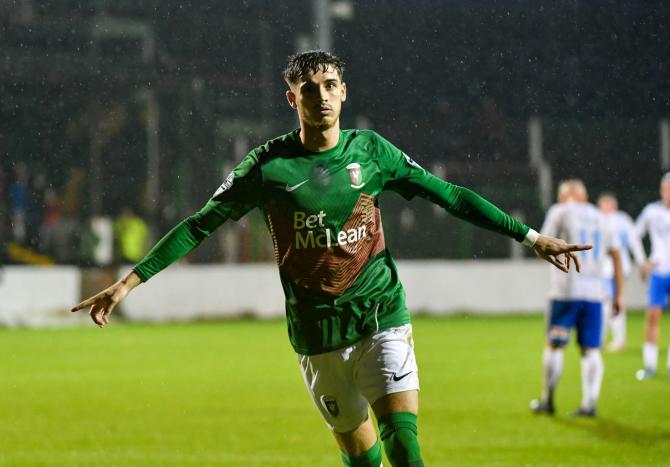 HOLDERS Coleraine put their trophy on the line this evening (Tuesday) when they host Glentoran in the quarter-finals of the Bet McLeague Cup.

The Bannsiders lifted the cup with a 2-1 win over Crusaders in the 2019 final at the National Stadium and have held the trophy for almost two years, last year's final cancelled because of Covid.

And they're determined to hold on to it for a while yet.

“We hold the cup at this point in time and there was a lot of work that went into that to achieve that,” said manager Oran Kearney.

“With that, it is not something that we want to give up easily. We know that Glentoran will be hungry to do well but for us it’s a big opportunity to try and get into the semi-final.

“The supporters are massively important in that. I was frustrated for the fans against Carrick on Saturday as the guys who were there never stopped supporting us.

“In the last 20 or 30 minutes, and even Skinner’s chance towards the end, they were nearly dragging the ball into the net.

“It was frustrating but hopefully we get a good turn out tonight,” he added.

“Any time we’ve played Glentoran recently the games have been tough and I wouldn’t expect Tuesday night to be any different.

“They’re in good form, we’ve been in good form, so it’s important and we want to get to the semi-finals," added the Ballymoney man.

The Bannsiders go into the game on the back of a scoreless draw against Carrick Rangers at the weekend while Glentoran enjoyed a 2-1 win over Warrenpoint Town.

The sides drew 2-2 in a league game at the Oval back in October in a game remembered more for the sending off of Glens’ keeper Aaron McCarey than anything else.

It could be similarly tight this evening with perhaps extra-time and penalties required to determine a winner.

Andy Law’s side knocked another Danske Premiership side, Dungannon Swifts, out in the previous round and will relish causing another upset at Milltown.

They have won their last four league games in the Premier Intermediate League and travel south full of confidence. However, their preparations have been hit by injuries and suspensions to key men.

“It’s not ideal but we’ll go there and give it a go and see what happens,” said Law.

Good luck to both sides tonight!