Top two go head to head at the Coleraine Showgrounds 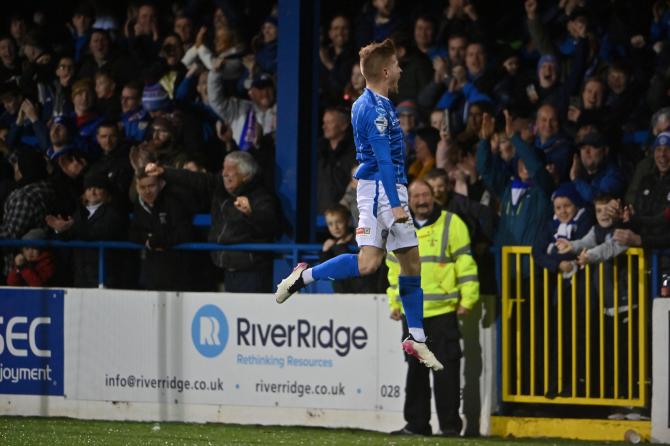 Lyndon Kane celebrates his penalty against Larne in front of a packed Railway End.

ANOTHER huge crowd is expected at the Coleraine Showgrounds this Saturday as second-placed Coleraine host league leaders Cliftonville in a mouth-watering top of the table clash.

Over 3,500 watched the Bannsiders' 3-1 defeat of Larne last Friday night and it is anticipated that a similar number will pack into Ballycastle Road for the game of the day in the Danske Bank Premiership.

It's a second league meeting of the teams this season, the Reds winning the first game at Solitude 2-1 at the end of the summer.

Joe Gormley and an own-goal from Stephen O'Donnell handed the home side victory on that occasion, Aaron Traynor pulling a goal back near the end.

That game made it two defeats in their opening two games for Coleraine but, remarkably, they haven't lost a game since.

They have racked up 11 wins and four draws since that August evening and improved beyond all recognition.

Where they conceded six goals in those first two games against Larne and Cliftonville, they have conceded just four in the games since.

They have also been scoring freely at the other end and have failed to find the net just twice in 14 games.

Matthew Shevlin leads the way with nine league goals but he has enjoyed support from the likes of Conor McKendry and Jamie Glackin among others.

Saturday's opponents, too, have been mightily impressive to date, losing just two league games, both away.

In Ryan Curran they have a striker who knows where the goal is, having netted eight times in the league, with Joe Gormley and Paul O'Neill also dangerous opponents.

The Reds are also strong defensively, having conceded just one more goal than Coleraine, 11, and have plenty of options in midfield.

They somewhat surprisingly went down to Ballymena Utd in October before losing 1-0 to Linfield at the National Stadium in their last outing.

The north Belfast side go into the game four points ahead of Coleraine, 32 points as opposed to 28, the extra points coming by virtue of two more wins than their rivals.

A win, then, for the home side this weekend would narrow the gap to just a single point ahead of a massive week with a game against Glentoran on Tuesday night followed by the visit of reigning champions Linfield next weekend.

So, what are their prospects?

Well, Coleraine remain a formidable force on their on patch, despite the transformation of the playing surface from grass to 3G.

Ben Doherty's goal for Larne was the first conceded at home this campaign while you have to go back a calendar year for the last time a team lowered Coleraine's colours in front of their own fans.

They have also improved from the last meeting with Cliftonville.

On that occasion, Oran Kearney elected to go with three centre-backs with Aaron Jarvis flanked by Rodney Brown and Stephen O'Donnell.

However, the Ballymoney man obviously didn't like what he saw, withdrawing Jarvis after just half an hour, replacing him with Josh Carson and reverting back to the tried and tested back four of Kane, Brown, O'Donnell and Traynor. It's been that way since, with Gareth Deane the fifth member of the league's second meanest defence.

In front of them, Carson and Stephen Lowry have formed a formidable central midfield axis allowing Conor McKendry and Jamie Glackin to do their stuff in front of them.

Aside from scoring goals themselves, they provide the ammunition for in-form striker Matthew Shevlin and whoever is selected to partner him up front.

At times this season it has been Eoin Bradley or Cathair Friel or, in the case of the Larne game, the exciting teenage prospect that is Patrick Kelly.

Just turned 17, the Portstewart schoolboy showed remarkable maturity to ease his way into that game after a slow start. So much so that by the time he was subbed late on to a standing ovation he had become one of the more influential figures on the field.

Whether he retains his place remains to be seen. His manager rates him highly but is conscious of the need to protect him too, especially in what is a three game week.

That is for Oran to decide which, is fine by me: he doesn't tend to get much wrong, does the Ballycastle based schoolteacher, and I trust him to pick a side strong enough to claim the three points this weekend.

* Tickets for Saturday's game are currently on sale and selling fast so the advice is to get your tickets as soon as possible.