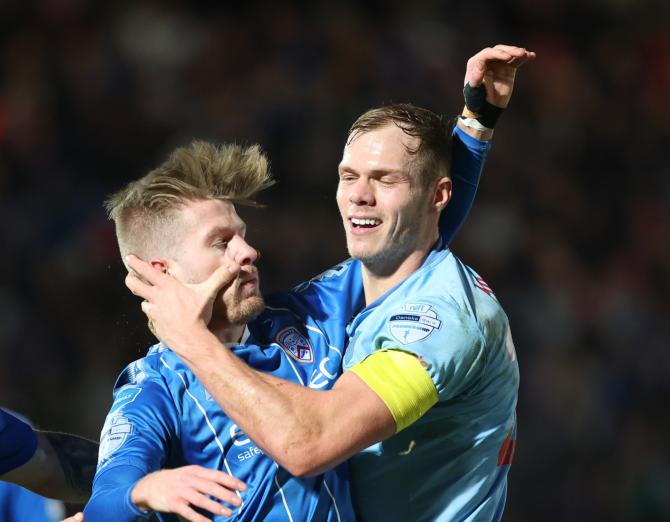 Lyndon Kane and Leroy Millar get up close and personal on Monday.

COLERAINE fell to a derby day defeat at Ballymena Utd on Monday as David Parkhouse netted in the 90th minute to seal an unlikely win for the home side.

The home side had opened the scoring within the opening five minutes when Paul McElroy took advantage of some slack marking to fire Ballymena Utd in front with a cool fiish.

But from that point on and for most of the match, it was the visitors who dominated.

They created a number of openings but were forced to wait until the second half when 'supersub' James McLaughlin climbed off the bench to level with his first touch.

He cleverly timed his run to latch on to Conor McKendry's through ball before deftly chipping the ball over the advancing United keeper.

The visitors continued to be in the ascendency but they couldn't find the elusive second goal.

And they were made to pay for their profligacy in the dying moments of the game when former Derry City striker Parkhouse escaped the attentions of the Coleraine defence to prod the ball home from close range, much to the delight of home fans.

The away side almost levelled in added but ill luck and a lack of quality ensured that it was David Jeffrey's side celebrating at the final whistle.

The result sees Ballymena close the gap on sixth-placed Coleraine to just two points with half of the season remaining.

Perhaps more worringly for Oran Kearney were the injuries picked up by goalkeeper Gareth Deane and winger Conor McKendry.

Both men were transported to hospital by ambulance after the game.

Coleraine must now regroup ahead of the New Year's Day game at home to Warrenpoint Town and try to end this poor run of form which has seen them fail to win any of their last six games.

Creating opportunities is not the problem - they had 11 efforts on goal in the match as opposed to their opponents' 4 - but taking them is.