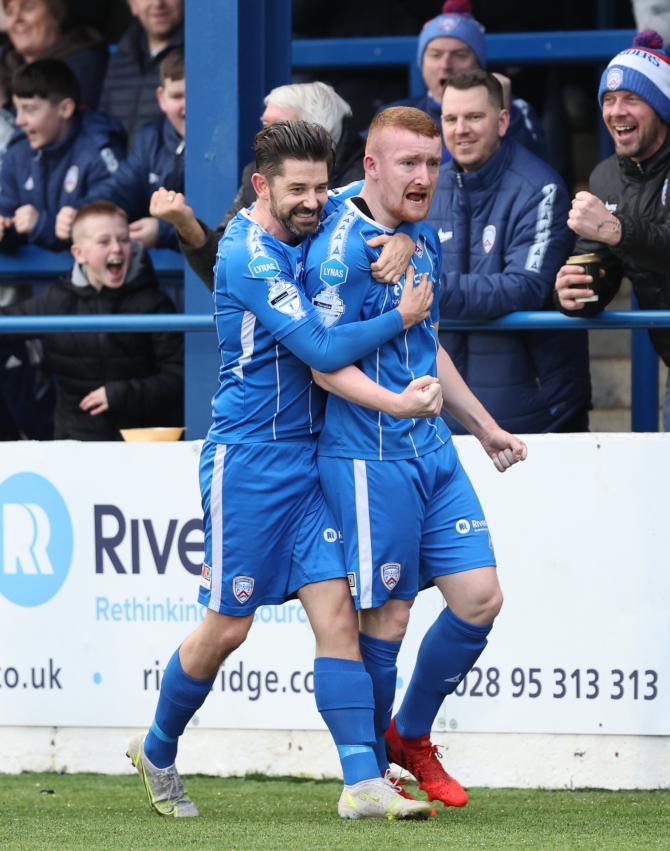 Rodney Brown celebrates after opening the scoring in the 3-0 win over Carrick Rangers.

COLERAINE'S seven game run without a league win came to a welcome end on Saturday as they defeated Carrick Rangers 3-0 at the Showgrounds.

Rodney Brown headed the Bannsiders in front midway through the first half after the visitors had started brightly.

An own goal saw the home side lead 2-0 at half-time and a penalty soon after the restart ensured there was to be no way back for Stuart King's side.

It's now four times the sides have met this season with Carrick yet to score.

Coleraine showed three changes to the side which drew 0-0 with Portadown seven days before as Oran Kearney sought to freshen his side.

Conor McKendry, Aaron Trayor and Matthew Shevlin all dropped to the bench as Adam Mullan, James McLaughlin and Aaron Jarvis came into the staring line-up.

And while the away side began brightly and forced Gareth Deane into a smart save once Brown headed home a Jamie Glackin free-kick there was only ever going to be one winner.

A Gordon own goal meant the hosts were comfortable at the break and they made sure of all three points when Lyndon Kane was fouled and scored from the penalty spot after half-time.

The win sees Coleraine consolidate sixth place in the league, on the same number of points as Ballymena Utd but with a game in hand.

They now turn their attentions to a trip to the Oval on Tuesday and a clash with second-placed Glentoran before Linfield visit Coleraine next Saturday.