DANSKE BANK PREMIERSHIP: As you were at the top as Cliftonville and Linfield play out a stalemate 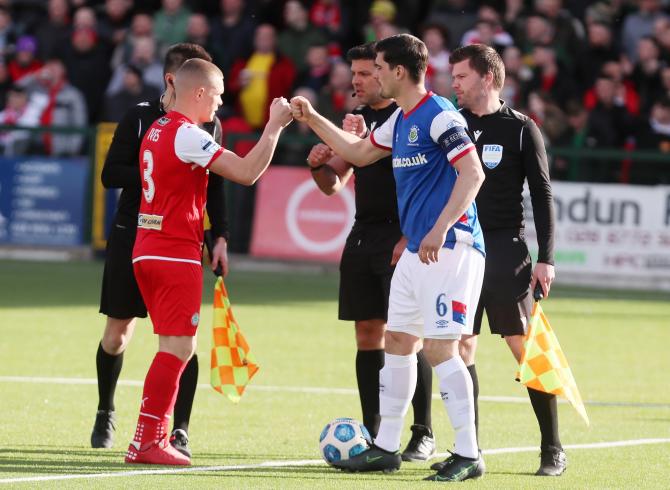 It’s as you were at the top of the Danske Bank Premiership as both Linfield and Cliftonville played out a goalless stalemate at Solitude.

The two sides couldn’t be separated, keeping the Blues four points ahead of the Reds.

Glentoran’s hopes of winning the title evaporated further after a thundering defeat to Crusaders at the Oval.

Goals from Declan Caddell, Philip Lowry, Daniel Larmour and Paul Heatley made it a miserable day at the office for Mick McDermott’s side, who are now six points behind Linfield with four games left to play.

In the Friday night game Larne secured a comprehensive 3-0 win over Coleraine.

A brace from Lee Bonis and an unstoppable effort from Mark Randall gave the Inver Park side the win.

In section B of the table Warrenpoint Town gave themselves a lifeline of staying up with a win over second from bottom Portadown.

Kealin Dillon put the Mournemen into a lead they would not lost from the penalty spot and reduce the gap between the two clubs to nine points.

Kym Nelson put David Jeffrey’s side in front in the first half and Glenavon’s day looked to get worse when Danny Wallace conceded a penalty and received his marching orders.

However, goalkeeper Josh Clarke saved it and, from there the momentum swung Glenavon’s way. A Calum Birney header and a brace from Peter Campbell earned a vital three points for the Lurgan Blues.

In the day’s other game David Cushley’s goal gave Carrick Rangers the win over Dungannon Swifts, who had goalkeeper Declan Dunne sent off.