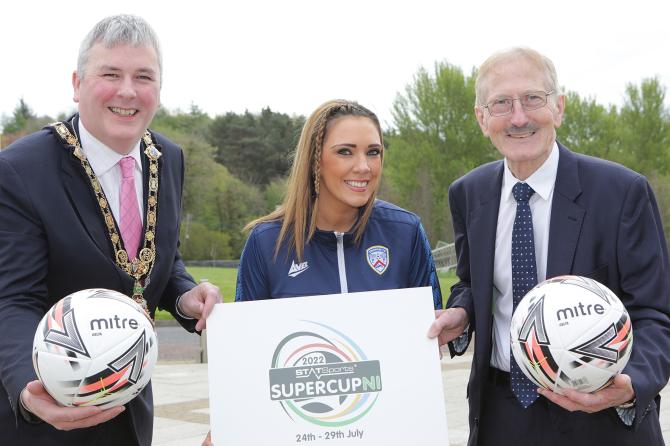 Twelve of Northern Ireland’s top U14 sides will face stern opposition from England, America, the United States of America and the Caribbean in the newly created Youth section of the STATSports SuperCupNI.

The Youth section of the tournament was established following the success of the Minor tournament back in 2018 and chairman of the organising committee Victor Leonard said it should be a hotly contested age category.

“The players in this U14 age group would have been due to represent their clubs at the competition in 2021, but unfortunately as a result of the pandemic we were unable to facilitate a fully operational tournament," he explained.

“We wanted to ensure that those boys who would have been involved last year were still able to enjoy the tournament experience and that has led to the establishment of this new U14 age group.

“We have attracted 16 top quality teams and we believe that this age group could act as a springboard for some of our best local talent to go on and shine with their Counties in the Junior and Premier Sections in years to come.”

The Northern Ireland entry is led by newly crowned NIBFA Cup winners Linfield, who will be hoping to claim their first ever trophy at the tournament later on this summer.

The Windsor Park side are joined by Belfast rivals Glentoran and Crusaders FC. Tournament regulars Greenisland FC are always a force to be reckoned with and the East Antrim outfit are joined in the draw by County Antrim rivals Ballymena United.

There is a strong Mid-Ulster presence in the U14 section, with Loughgall FC, Dungannon Swifts, Glenavon and Portadown all looking to impress come the end of July. There will be plenty of vocal backing for hometown outfit Coleraine FC and they are joined in the draw by Bangor based outfit Castle Juniors and Fermanagh side Ballinamallard United.

Joining 12 of Northern Ireland’s finest in the draw on May 26 are four top quality sides who have their sights set on top spot.

Newcastle City Juniors FC are one of the leading youth sides in the North East of England and they are joined in the draw by Surf Soccer USA, who will have some of America’s finest U14 players in their panel and will be eager to make an impression.

Finn Harps have been strong supporters of the competition and their U13s made it all the way to the semi-finals back in 2019 and their U14s will hope to go one step better in 2022.

Our final entrant in the U14 section is the IDA Bermuda team and they will be making history by becoming the first ever team from the Caribbean to play in the competition.

The 2022 event will take place from Sunday 24th July to Friday 29th July, with the traditional parade and opening ceremony at the Coleraine Showgrounds kicking off proceedings on the Sunday evening and the tournament will culminate with the final day of football action on Friday 29th July. The tournament will take place at seventeen venues across the three local Council areas of Causeway Coast and Glens, Mid and East Antrim and Antrim and Newtownabbey.