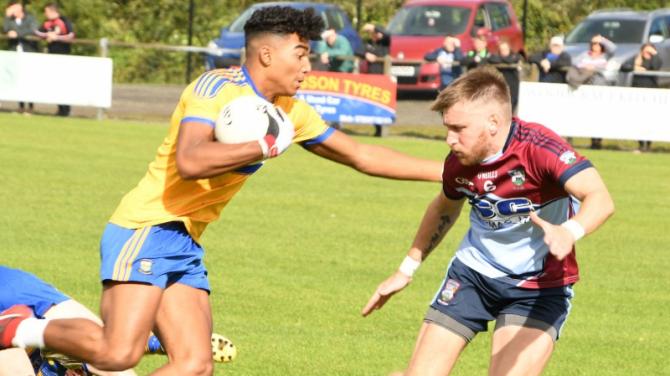 THE biggest mystery of this game was just how Glack managed to get so close in the end albeit with a late and brilliantly struck goal from Adam O’Kane.

Glack who trailed by 1-9 to 0-4 at half time played the last 25 minutes with fourteen men after Liam O’Brien was set off.

A goal from the penalty spot and that late Adam O’Kane effort made it a closer game that it should have been.

A blistering start from the Wolfhounds saw them reach their second consecutive championship final at the expense of parish neighbours Glack.

By the time Ryan Morgan kicked Glack's first score from a free in the 18th minute, the recently promoted league winners had 1-08 showing on the scoreboard as they dominated all over the field.

Cormac Quigley found the Glack net within 55 seconds and this set the tone for the opening quarter.

The angle wasn't in his favour but his powerful shot gave James Martin McLaughlin no chance.

The Wolfhounds continued to launch attack after attack and Glack offered little in any way of resistance as Kieran McGlinchey,  Cormac Quigley,  Callum Brown and the Hasson brothers, Ruairí and Oisin contributed to the Limavady tally.

Glack finished the half strong and two points from midfielder Aaron Moore but they still had a mountain to climb as they trailed 1-09 to 0-04.

A point each from Ruairí and Oisin Hasson extended Limavady's lead to ten points at the start of the second half and matters got worse for Glack when they were reduced to 14 players when Liam O'Brien got his marching orders for striking Limavady replacement Brandon O'Brien.

Niall McGowan kept Glack in touch with a series of frees and a ‘45 but two Eugene O'Kane points in quick succession had Limavady in an eight point lead with as many minutes left to play.

Adam O'Kane was starting to get a bit of joy in Glack's inside forward line and with five minutes remaining he intercepted a Oran Hartin kick to race clear on goal, however just when he was about to pull the trigger he was dragged down by Ruairí O'Kane.

Referee Sean McGuigan had to option but to show O'Kane a Black Card and award Glack a penalty.

Up stepped Niall McGowan and he sent Hartin the wrong way to may be just give Glack a little bit of hope, but as the game ticked into injury time Aaron McGregor pointed for a six point lead.

With time against them Glack threw caution to the wind and Adam O'Kane hit a fantastic goal from 20 metres to set up dramatic finish, but there wasn't time for a restart and the Wolfhounds advanced to a final against Moneymore in a repeat of the 1999 final.

Over at Ballinascreen on Sunday Moneymore had their expected comfortable win in the other semi final winning by 2-13 to 0-7 but the winning margin flattered them as Dolan’s hit the crossbar three times during the game as they created quite a few goal chances.

After the game it emerged that tall Limavady midfielder Jack Doherty had broken a foot bone and will be out for at least six weeks.