Derry get better of tough Ernesiders 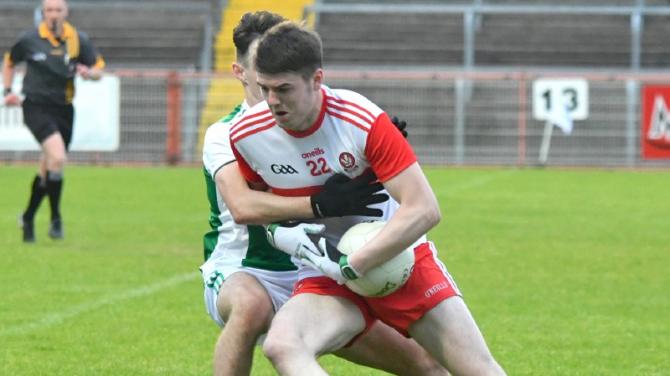 HOLDERS Derry have moved to within one step of retaining their Ulster crown after grinding out a three point win against a resurgent Fermanagh side.

Declan Cassidy turned in a sterling display for the Oakleafers, kicking 1-2 over the course of the hour, including a crucial goal seconds after the restart which gave Derry a four point lead.

Lorcan McWilliams kicked four of seven first half points but was forced out of the second half action due to injury. This is another worry for Derry coming up to the final as their injury list mounts.

This meant that all three of Derry’s rising star all-stars for 2018 in Ben McCarron, Oisin and Lorcan McWilliams were unavailable for a nail-biting second round clash in perfect conditions at Omagh on Friday evening,.

Ollie Fay was able to call upon Fermanagh senior football regulars Ultan Kelm, Johnny Cassidy and Darragh McGurn after their senior campaign drew to a close.

Magee University star Cameron McBrien captained the Ernesiders and grabbed a goal to keep his team in contention before two late 45’s from Fintan Bradley were snuffed out to book a second successive final appearance for the reigning champions.

Mickey Donnelly’s men will now meet Tyrone in a mouth-watering decider next Sunday with the venue set as the Athletic Grounds, Armagh.

*Read the full report inside this week's paper.