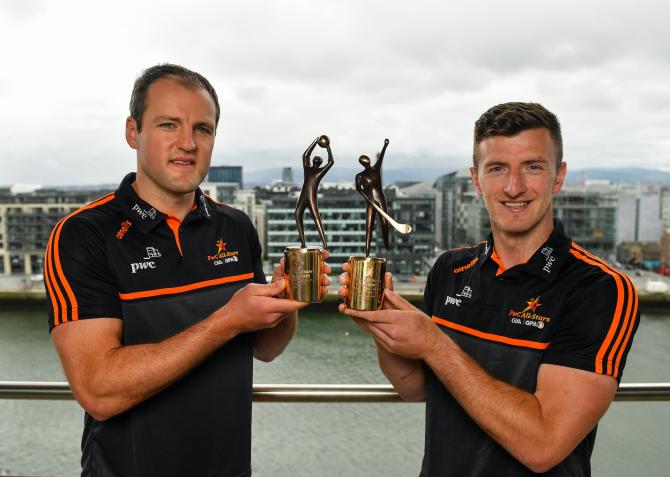 PwC GAA/GPA Players of the Month for July, footballer Michael Murphy of Donegal, and hurler Patrick Horgan of Cork, pictured with their awards at PwC offices in Dublin. The players were joined by PwC’

THEY may have missed out on All Ireland honours but there was some consolation for Donegal footballer Michael Murphy and Cork hurler Patrick Horgan when they were named PwC GAA/GPA Player of the Month award winners for July.

Murphy was instrumental as Donegal battled through to the Super 8 series where they bowed out only after a thrilling defeat to Mayo in Castlebar.

Meanwhile, Horgan struck 3-10 in a sensational display against Kilkenny in the All-Ireland quarter-final but Cork fell badly short, slumping to a six-point defeat.

The Cats will play old rivals Tipperary in the All Ireland Hurling final later this month.

The All Ireland football semi-finals will see Mayo and Dublin lock horns this Saturday evening before Tyrone and Kerry meet less than 24 hours later.

Both games will be played at Croke Park.