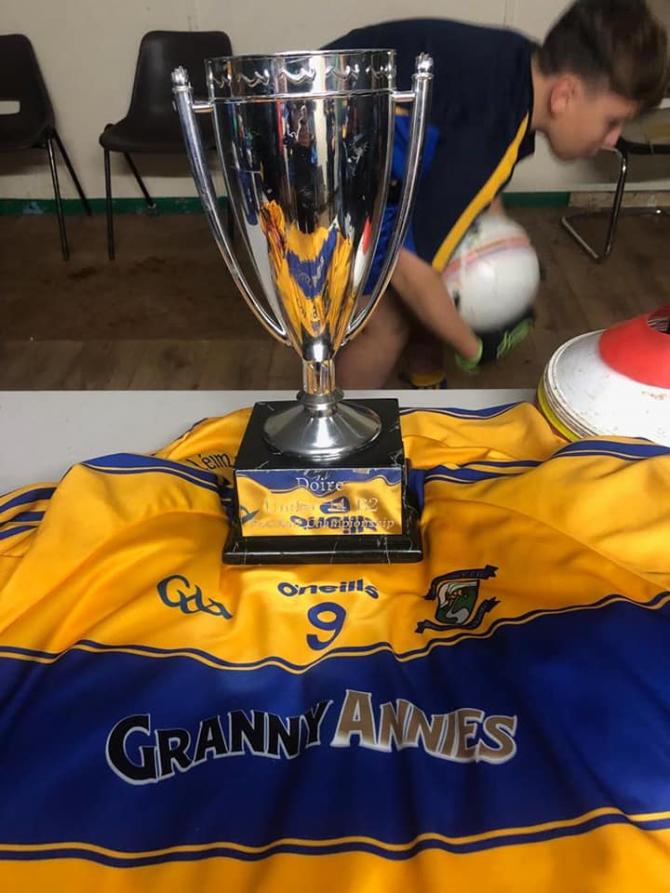 LIMAVADY Wolfhounds Under 14s claimed a famous victory on Friday night when the Na Cúnna lads were able to overcome a good Foreglen side in the final to lift the All County B2 championship trophy in Faughanvale.
A sizeable crowd watched the Wolfhounds lead from the very start as the team were able to hold onto the ball well, get stuck into tackles and move the attack forward without haste.
Successive points from Luca Doherty, Rossa Mullan and Caoimhin McGonigle allowed the ‘hounds’ to create a cushion for themselves in the opening ten minutes.
A well taken goal by Rossa Mullan in the 15th minute was a just reward for Limavady’s dominance and control.
Foreglen quickly responded by registering a few scores of their own which kept the game alive coming into half-time.
The young hounds entered the break leading 1-6 to 0-3 after a confident and composed first half display.
Foreglen came out into the second half determined not to let the game’s proceedings be all one way.
The O’Briens side soon were creating more scoring opportunities.
Before long Foreglen had scored a goal courtesy of nippy forward, Caoimhin O’Connor and were now posing a real challenge to the Limavady defence.
Due to a number of wides and a rejuvenated Foreglen, Limavady weren’t able to enjoy the same level of comfort as the first half provided but were still racking up scores.
Limavady’s Noah Canning was designated as target man for the second half and he was able to make good on the top delivery into the full forward line which gave Canning ample opportunity to lodge three points.
Coming into the final period a superb piece of goalkeeping from Na Cúnna’s Canice Mullan was not enough to stop Foreglen scoring a second goal bringing the score line ever so closer.
Measured defending by the Limavady full back line ensured that Foreglen would not breach again in the last few minutes.
The victory was all but guaranteed with scores from Limavady midfielders Ben McGonigle and Jake Marshall which was soon followed by jubilant scenes at the final whistle.
The super win was a culmination of all the hard work and dedication that has been shown by the players throughout the season.
Prior to the final the Wolfhounds finished second in a very competitive league campaign before picking up vital championship wins at Doire Trasna and Lissan.
A special mention must be given to the team mentors who coached and advised the boys throughout the year, these are Phelim Mullan, Kevin Mullan, Richard Hartin, Shane Forrest and Paul McCawille.
The Northern Constitution would like to congratulate the Limavady Wolfhounds U-14 team on an outstanding achievement and wish the boys well in the future.
We hope they will continue their successes at under 16 level and beyond. Na Cúnna Abú
Limavady Wolfhounds squad who were involved throughout the year:
Calum Burns, Noah Canning, Daire Devine, Luca Doherty, Martin Kirk, Jake Marshall, Oran McCawille, Caoimhin McGonigle, Ethan Mc Kinney, Darragh McLean, Canice Mullan, Anton O’Neill, David Butcher , Darragh Deehan, Thomas Devine, Tiarnan Forrest, Cathal Hasson, Lee Loughrey, Dara McAuley, Ben McGonigle, Fintan McIvor, Eoin McWilliams, Rossa Mullan.