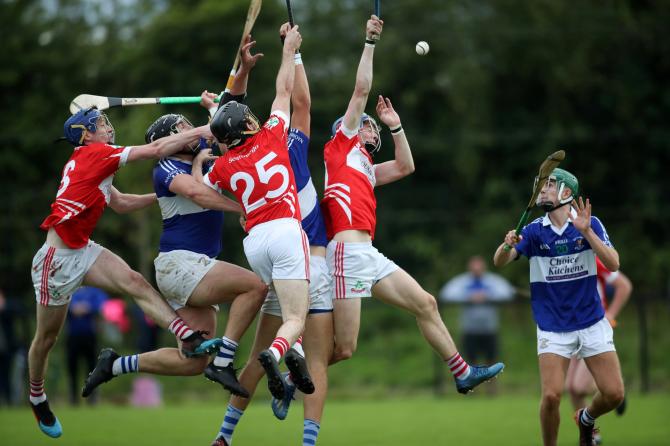 Loughgiel were pushed all the way by St. John's in the semi-finals.

AFTER a Bathshack Antrim SHC like no other, Sunday's final has a decidely familiar look to it.

Old rivals Dunloy Cuchullains and Loughgiel Shamrocks meet at Ballycastle on Sunday afternoon, two clubs with 33 title wins between them.

The former, of course, are the current county champions while you have to go back to 2016 for the last time the Shamrocks got their hands on the Volunteer Cup.

But while it's maybe no surprise to see the clubs contest Sunday's decider, what is perhaps surprising is just how tested both were along the way.

The nature of this year's Covid-19 affected championship saw some memorable contests, with Belfast clubs St. John's and Rossa counting themselves unlucky to miss out on a big day on the north coast.

Rossa ran the champions close in their semi-final before going down by the minimum on a scoreline of Dunloy 1-22, Rossa 2-18, while Loughgiel found it even harder going, coming through in extra-time to finally get the better of St. John's on a score of 2-31 to 5-18.

Both games reflected the tight nature of club hurling this year and points to something similar this weekend.

Dunloy may start as slight favourites but that will undoubtedly suit their old rivals who would love nothing better than dethroning the champions.

Gregory O'Kane will hope his much heralded front line can show what they can do while his Shamrocks' counterpart will look to the experience of the likes of Eddie McCloskey and veteran Liam Watson to get them over the line.

Unfortunately, as in keeping with current guidelines, a restricted crowd will be in attendance at McQuillan Park on Sunday but the good news for those without a ticket is that the clash will be shown live on TG4.

The match starts at 2.45pm, Darren McKeown is the man in the middle and we will have full report and reaction in Tuesday's Chronicle.