Slaughtneil hurlers close in on eight in a row 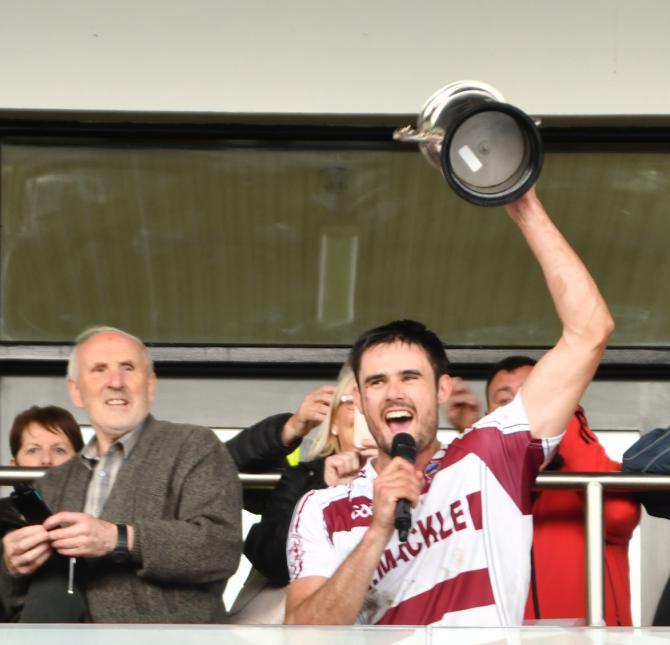 Can Slaughtneil hurlers make it eightitles in a row this weekend?

LAST December, Slaughtneil hurlers gave Ballyhale Shamrock’s of Kilkenny a stiff test before losing by 2-23 to 2-18 in the All Ireland senior club semi final at Newry.

Ballyhale, led by TJ Reid, the best hurler in the game, were rated as the best club team ever seen. It took an injury-time goal from full forward Michael Fennelly to clinch a game which reached classic proportions. Slaughtneil drew wide praise for the quality of their play.

In the county, the only real challengers are the Dungiven men who gave the champions a real test in the past two years. In 2018, the Lynch’s looked to be denied a stonewall penalty at a crucial stage when they lost by just two points. Last year, it was close for fifty minutes but when Slaughtneil found another gear it was all over.

Apart from their skill and experience, Slaughtneil are a big and powerful team whose direct play is hard to counter. The opposition on Sunday is generally young and skilful but may have the edge in pace over the champions who have not lost a championship game in Derry since 2012.

In that period they have won three Ulster titles, on each occasion defeating Antrim opposition in the decider. Last year, they overcame a fancied Dunloy team by 1-15 to 0-10. Their other two provincial titles came in 2016 and 2017 while they were beaten in a replay by Cushendall in the 2015 decider. Unfortunately for county champions in hurling and football there are no provincial competitions this year due to time constraints and the Colvid-19 issue.

The Slaughtneil club has been setting all kinds of records since 2014. On two occasions they have held the Ulster hurling, football and camogie titles at the same time. Their camogie team were All Ireland champions in 2016, 2017 and 2018 and failed narrowly to make it four in a row when they lost to Sarsfield’s of Galway last season.

A win for Slaughtneil on Sunday would see them make it eight titles in a row; their seven in a row was a record and it is hard to see in the current balance of Derry hurling who can even come near that seven, or eight as it is likely to be.

In the semi finals, Slaughtneil had a staggering 40 points to spare over near neighbours Swatragh. In that game, Slaughtneil were clinical, scoring 5-33, with Brendan Rogers hitting four of the goals. They just conceded eight points in return.

Kevin Lynch’s also had a bit of a cruise, thumping Ballinascreen by a 24 point margin. They have had a boost with the news that experienced defender Liam Hinphey has come out of retirement and that will certainly bolster their defence which lacks height.

Eoghan Cassidy, who plays his football with Slaughtmanus, is emerging as a quality hurler with the challengers in midfield. He will team up alongside Richie Mullan but they will be facing a formidable Slaughtneil duo in the form of Chrissy McKaigue and Mark McGuigan.

At the other end, the Kevin Lynch’s defenders will have to work overtime to contain the likes of Cormac O’Doherty, Brian Cassidy and Brendan Rogers. Still, they will find it hard to get the better of the Lynch’s brilliant goalie Sean Kelly. This is likely to see them picking off points when the opportunity arises.

Due to Covid-19 restrictions just 400 spectators will be allowed at Celtic Park. Last year, this pairing attracted over 4,000 to Owenbeg.

It should be a good contest but, overall, Slaughtneil look to have too many strong points for Kevin Lynch’s to counter.