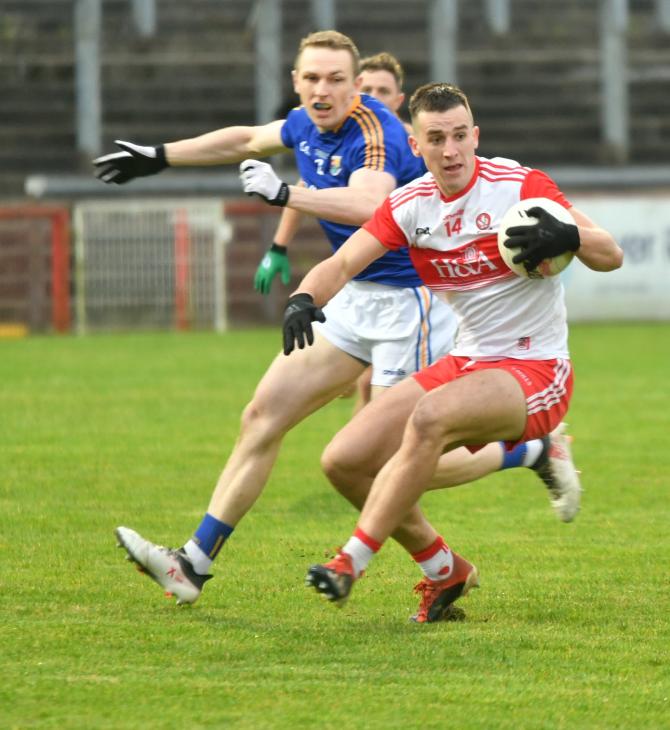 THE chance of back to back wins against Offaly in Tullamore on Sunday would give Derry renewed confidence going into the Ulster championship game against Armagh at Celtic Park on November 1.

With promotion now gone for both teams the focus will be on the championship. On the same day Offaly will play Carlow in the Leinster championship.

It is quite a few years since these teams met in the league with both now at a lower level than they were in the glory days.

Former Mayo star John Maughan has taken over as Offaly manager and has brought about a definite improvement in their performances.

Derry’s management were not idle during the lack of action on the pitch, making quite a few changes to the backroom team.

There has been some changes in the playing panel which has been whittled down. Niall Keenan (awaiting surgery), Ryan Bell, Oran Armstrong, Cathal Mulholland, Lorcan McWilliams, Peter Hagan, Conor McGrogan, Sean Francis Quinn, Ryan Dougan and Eoghan Duffy are no longer involved and the Eoghan Rua duo of Ruairi Mooney and Liam McGoldrick are on the injured list.

Among the additions are Ethan Doherty, Paul McNeill, who had been out with a long term injury, Connlan Bradley and Paul Cassidy.

Offaly lost their penultimate game away to Tipperary on Sunday by 1-16 to 0-16 and in an earlier round they had drawn with Longford which suggests they will be difficult enough to beat.

They have a top class goalie in Paddy Dunnican who has seldom been beaten this season. In attack, veteran Bernard Allen, Ruairi McNamee are the danger men, while goalie Dunnican has a very solid full back Eoin Rigney in front of him.

Derry will want to keep on a winning run with the championship game against Armagh seven days later.

With the current Covid-19 situation Derry are likely to travel by cars, as did Longford at Celtic Park last week. It is in the region of a three hour journey each way which is not the best preparation for a game.

Conor Glass is likely to get a start as manager Gallagher looks at his options for the championship. So far, Derry have lost their two away games, but if they can follow on the from they showed against Longford they can have a happy journey home.

The current league standings going into the final round are Cork 12, Down 9, Derry 7, Longford 7, Tipperary 5, Offaly 5, Leitrim 3 and Louth bottom without a point.