Derry hope to cause upset against Armagh 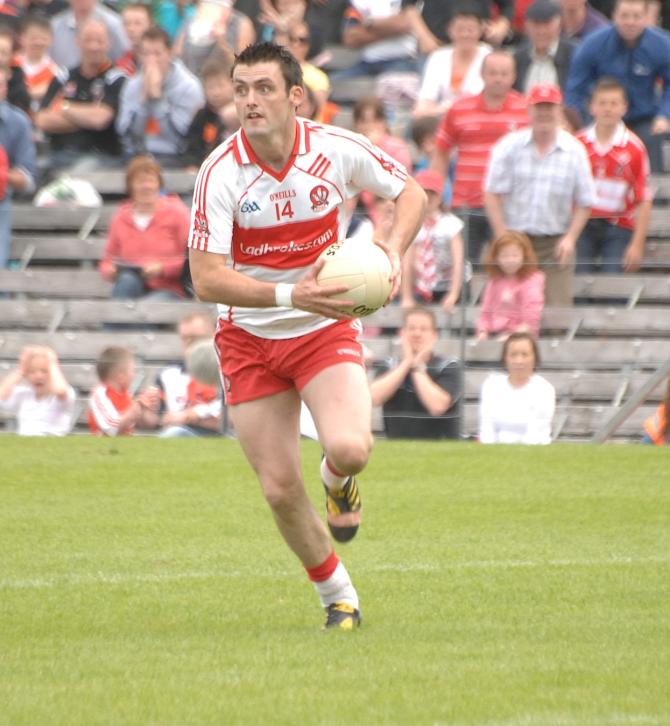 Eoin Bradley was one of the stars of the Derry team the last time they shocked Armagh in the Ulster Senior Football Championship.

IN these strange times, the opening round of the Ulster senior football championship is being played on the first Sunday of November.
A few months back there looked to be little hope of any championship football being played but even behind closed doors it has raised the hope of every Ulster county to pick up the Anglo Celt Cup in the first straight knockout championship for 20 years.
Due to time constraints, the GAA wisely went for the straightforward way.
One slip and you are out!
The last meeting of these counties in the Ulster championship was 2011 and, like Sunday’s game at Celtic Park, the Derry men went in as raging underdogs.
That occasion was the Ulster semi-final at Clones in front of an attendance of just under 15,000, mostly Armagh supporters.
Derry had beaten Fermanagh comfortably in the first round but the Orchard men were big favourites for the title.
In perfect conditions, Derry turned on the style to win a thriller by 3-14 to 1-11 with Conleth Gilligan, Eoin Bradley and Mark Lynch getting the goals.
Paddy Bradley was already out with a cruciate injury but Derry were dealt a cruel blow when his brother Eoin suffered a similar injury just a week before the final.
In the decider, Derry lost to Donegal by 1-11 to 0-8.
The winners were awarded a most controversial penalty when the game was in the balance.
For the Derry fans and players it will be something different from having to play either Tyrone or Donegal.
Since 2014, Derry have lost to Tyrone three times and Donegal twice in the first round. The last time a Derry team won a first round game in Ulster was in 2015 with a 0-12 to 0-11 win over Down.
This will only be the second time in 20 years that these counties have met in the championship. Previous to 2011, Armagh had beaten Derry by 1-12 to 1-11 in the Ulster semi final in the millennium year.
This will be the fifth year that Kieran McGeeney has been in charge of his native county.
The Mullaghbawn man spent the previous six in charge of Kildare with little success.
On Saturday past he would have been pretty happy to guide his team back to Division One after an eight year lapse.
They travelled west to Clare and won by 1-18 to 1-13 to finish second to Roscommon and go up along with them. For long periods,. however, Clare gave them a lot of trouble.
McGeeney seems to prefer teams with big men who play direct football and the present Armagh team fits his bill.
However, his team looks to be a bit porous at the back. They conceded 3-9 in a home defeat against Roscommon and, seven days later, 1-13 against a moderate Clare team who faded in the closing stages of the game.
The 29 year old Crossmaglen man Jamie Clarke is a much travelled man. He has played in New York and London but, curiously, does not turn out for his club Crosmaglen Rangers.
A few years ago he was feted as one of the best forwards in the game but currently has not been making much of an impact. In the last two games he scored just a point in each.

McGeeney has been working hard to make his defence more secure and now has noted forward Aidan Forker playing in the full back line.
Play anywhere veteran Mark Shiels has been plugging the centre half spot with James Morgan, normally a corner back, on his left.
One area where they are pretty strong is at midfield where Niall Grimley and Oisin O’Neill are a strong pair and they also have Jarleth Og Burns on the bench; he would start on most teams.
Rian O’Neill, a brother of Oisin, is a very good full forward and his battle with Brendan Rogers will be a feature of the game.
Over the years there has not been a lot between these counties and there is a very good reason why Derry will not fear McGeeney’s men.
In the past decade, most of this Derry team would have been involved with under age teams who have dominated Armagh, both at club and county level. While Armagh have been a lot longer together as a group Rory Gallagher has been loading up his Derry side with players who had club and provincial success.
Add in the Slaughtneil factor where the leadership of players like Chrissy McKaigue, Brendan Rogers and Shane McGuigan will be a bonus for Derry.
Then there is the return of Conor Glass who has spent the last four years as a professional athlete in the Australian Rules game. However his lack of game time may prevent him from starting.
The Greenlough duo of the vastly experienced Enda Lynn and the accurate Niall Loughlin will put pressure on the Armagh defence which does not like players running at them.
If Derry are to win they must play on the front foot. They are a much better team going forward as they have shown recently.
In the earlier league games they spent too much time defending and not enough attacking.
Considering that Armagh will be playing Division One football next season against the likes of Donegal, Dublin and Kerry there is every reason for Armagh to be confident.
Contrast that against Derry who will be playing in the third division against lesser mortals like Limerick, Wicklow and Fermanagh.
With back to back wins in their last two league games Derry have built a bit of momentum, they have nothing to lose so attack is the best form of defence. In this unpredictable mini season anything can happen!