Saffrons in search of All Ireland glory 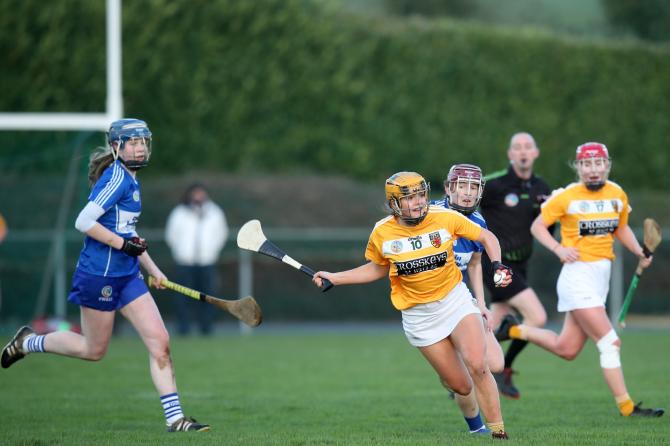 Ballycastle’s Maeve Kelly has been an integral part of Antrim’s success in reaching this weekend’s All Ireland final and is likely to play a key role again this weekend.

ALL roads lead to Breffni Park in Cavan this weekend as Antrim’s camogs go in search of a first All Ireland Intermediate Championship title in years.

The Saffrons will meet neighbouring county Down in Saturday’s intriguing final.

Unfortunately, given the current coronavirus protocols, spectators will not be present but the good news is that the game will be shown live.

RTÉ Sport has announced that the 2020 Liberty Insurance All-Ireland Intermediate and Premier Junior Camogie Championships finals will be broadcast live on the RTÉ News channel and on the RTÉ Player and Player International.

And with four Ulster sides competing on Saturday, the finals will also be broadcast live via the BBC iPlayer.

The day will begin with the Premier Junior Final at 1.45pm with Armagh facing Cavan while the Intermediate final throws-in at 3.45pm and sees Antrim against Down.

The venue hardly seems ideal for a game featuring Antrim and Down but that will hardly bother the Saffrons whose three previous games have all been played at Inniskeen in county Monaghan.

The girls hail from Loughgiel, Ballycastle, Dunloy and Cushendall with local schools also playing their part in producing a conveyor belt of talent.

Cross and Passion College Ballycastle, who, over the years have been so successful in College competition, have no fewer than 17 former pupils in the panel while both St Louis Ballymena and St Killian’s College Garron Tower have also played their part.

In getting to this stage the Saffrons have beaten Carlow, Meath and Laois and, in doing so have amassed a six goal and forty point total.

However, they should also be aware that six goals and 21 points were conceded in the process.

Outstanding has been free taker Nicole O'Neill from Dunloy with 16 points against her name, nine of these coming in the Meath game.

Not far behind are dynamic duo, Maeve Kelly and Roisin McCormick. The Ballycastle girl and youngest member of the squad Kelly has scored in all three games with 2-7 to her credit followed closely by Loughgiel’s Roisin McCormick with a point less.

“They can do it and best wishes go with both team and management as they aim to add another successful chapter to the history of camogie in Antrim,” said a spokesperson.

Full preview, including pen pics of the Antrim squad, in this week's Chronicle.