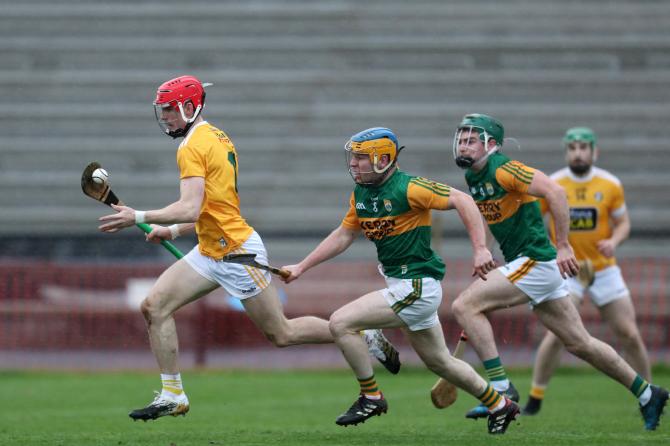 Antrim will play in the Leinster Championship next year following their success in the Joe McDonagh Cup.

THERE were great scenes of celebration at Croke Park on Sunday as Antrim hurlers celebrated their success in the Joe McDonagh Cup final.

The Saffrons produced a display of dogged determination to get over the line in the decider.

The 0-22 to 1-17 victory over opponents Kerry saw them lift the trophy and secure their place in the Leinster Championship next year.

It also caps a memorable year for manager Darren Gleeson and his troops who won promotion earlier in the campaign.

Ciaran Clarke again led the way in terms of scoring, the Ballycastle man again deadly from placed balls and from open play.

If his contribution was important so, too, was that of second half sub' Neil McManus.

The Cushendall stalwart started on the bench after missing the last couple of games through injury but fired over a number of vital scores following his introduction.

The win was no less than the Saffrons deserve after a tremendous season under the tutelage of the former Tipperary goalkeeper and his experienced backrom team.

They have successfully moulded a team which has worked incredibly hard to get back to the top table of hurling.

However, it could be argued the hard work is only starting.

For full report, reaction and photos pick up a copy of The Chronicle on Tuesday morning.