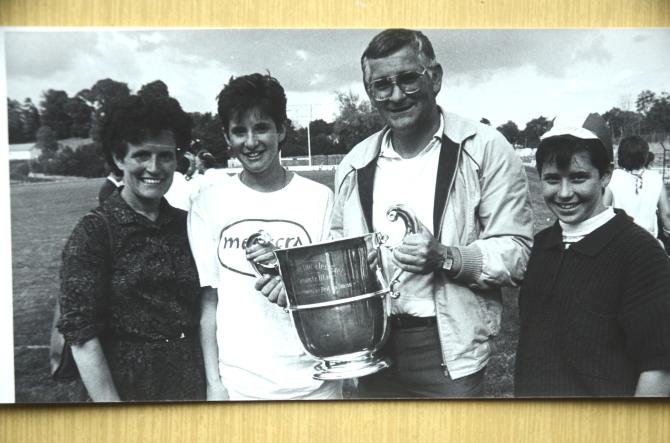 Tom Scullion pictured with wife Shena and his sons after guiding Derry to the 1987 Ulster final win at Clones.

RARELY a week goes by now that we have to report the death of someone who made a huge impact on the GAA in Derry.
The passing of Tom Scullion last Friday, even at the age of 81, was a huge shock to his multitude of friends.
A playing career of 17 years saw him amass a huge haul of medals and trophies at both club and county level.
As a teacher, footballer and team manager, Tom was as honest and genuine as they come.
Back in 1987, along with former Derry county team mates Jim McKeever and Phil Stuart, they managed Derry to an Ulster title, despite a short lived player rebellion earlier in the summer.
On retirement, Tom loved a game of golf and time spent with his lovely wife Sheena and family, in particular the grandchildren. He gave his 1972 county medal to his oldest grandchild.
As well as going into county management, Tom also served a spell as vice chairman of the Derry County Board.
His inter county career as a square shouldered and rock like centre half back lasted from 1958 right through to the end of the sixties.
In 1958, he was a member of the Queen’s University team that broke the Southern mould by winning the Sigerson Cup. It was the first time that the Sigerson had come to Ulster.
At that time, only four universities competed for the trophy and it was the first time that Queen’s won this prestigiouds trophy. Tom, who started his career as a forward, scored the winning point against UCD in the final at Castleblaney.
His career with Derry also began in 1958 when he came on as a sub’ when Derry beat Cavan in the Ulster final to win the provincial title for the first time. He was a regular on the team for many years after.
His club career coincided with the dominance of Bellaghy in Derry club football. They top the Derry charts with 21 titles and Tom played on 12 winning teams between 1956 and 1972.
The greatest moment in his club career came in 1972 when his club beat University College Cork - a team of county players - by 0-15 to 1-11 on Easter Monday at Croke Park in the All Ireland club final.
The competition had just started the previous year and was being played for just the second time.
In his club career he played along with some wonderful footballers like Tom Quinn, Larry and Tommy Diamond, Frankie O’Loane, Peter Doherty, Brendan Cassidy, Dan Joe Cassidy, Chris Brown and Austin Mulholland. On retirement, he managed his club to the 1975 county title.
In a statement from the Bellaghy club they paid tribute to Tom.
“Outside of football, he taught in and was principal of St Mary’s PS Bellaghy and an active loyal volunteer within the parish,” read a statement from the Bellaghy club.
“The most decorated club player ever in Derry, Tom led a generation of players through one of Bellaghy’s most successful periods on the field.
“Holder of an incredible 12 Derry SFC championship medals between 1956-1972, he also managed the senior team in 1975.
“A true gentleman and a born winner who will be sorely missed by all in the parish.
“Our sympathies go out to his wife Sheena, children and wider Scullion family.”
The Derry County Board tribute paid the following tribute.
“Derry GAA is saddened to learn of the death of Tom Scullion, a legend of club and county,” outlined a statement on the county's social media.
Tom’s requiem Mass took place in St. Mary’s Bellaghy at 12 noon on Sunday.