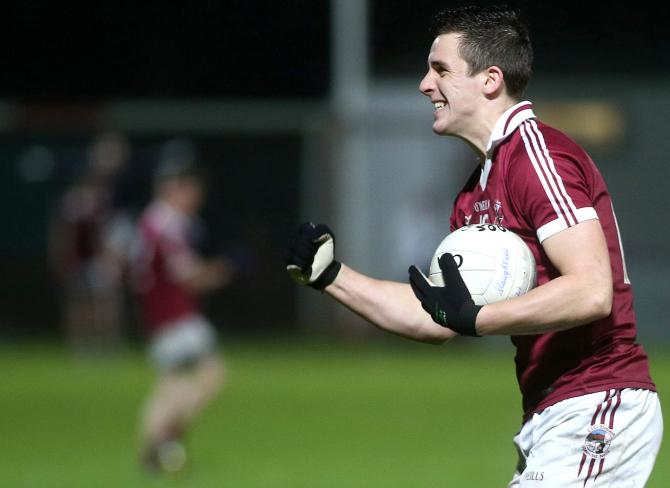 Slaughtneill will look to Derry star Shane McGuigan for scores when they meet Claudy on Friday night.

THE Loup and Newbridge are the early victors in the Derry senior football championship following victories over Ballinascreen and Ballinderry respectively on Thursday evening.

The former, managed by ex Glenullin and Derry star Paddy Bradley, got the better of the St. Colm's at Owenbeg while Newbridge defeated the Shamrocks by three points at Shamrock Park.

Attention now turns to Friday night when there are a couple of games taking place and the rest of the weekend with games across all three grades.

Banagher v Eoghan Rua at Banagher, Friday 8pm. Referee: Brendan Quinn
Two teams who have slipped down the championship rankings a bit meet at Fr. McNally Park Feeny under lights. Eoghan Rua played in the higher division and had more points than Banagher had in Division 1B. That does no mean that the Coleraine men will have an easy evening.
When championship time comes around Banagher seem to rise to the occasion. In this case they will be back to full strength with a forward line including Mark Lynch, Tiernan Moore, Peter Hagan and Gavin O’Neill.
Eoghan Rua could be in for a shock!

Slaughtneil v Claudy at Slaughtneil, 8pm Friday. Referee: Sean Curran
Claudy did not win a single game this year and that trend is unlikely to change. Slaughtneil are the holders and Claudy have slipped back from last year. The Claudy defence has been leaking badly this year and the prospects of them stopping Shane McGuigan and Christopher ‘Sammy’ Bradley look pretty remote.

Lavey v Swatragh at Lavey, 3.30pm Sunday. Referee: JJ Cleary
Swatragh became the first team to beat Lavey in the league and they will travel to the Erin’s Own with a spring in their step. Lavey are on the way back but they are lightweight in some areas but they are loaded with pace. Swatragh’s powerful Conor McAtamney can give the Davitt’s a grip at midfield and that could get them over the line.

Glen v Bellaghy at Glen, 2pm Sunday. Referee: Kieran Jr. O’Connor
Glen have a formidable looking panel and they mean business by bringing in Malachy O’Rourke to get the best out of this talented bunch. They look strong up to midfield but the forward division is small in places. They will be fancied to get past a youthful Bellaghy team that is moving in the right direction under John McKeever. Glen look to have too much on this occasion.

Magherafelt v Kilrea at Magherafelt, 5-30pm Sunday. Referee: Dan Mullan.
Magherafelt’s league form is a bit of a mystery for a team that contested the last two county finals. They kept changing their team from game to game, maybe that was to look for new talent particularly in attack. Kilrea had a decent run in Division 1B so manager Declan Bradley can use this game to see what progress they have made. Magherafelt’s greater championship experience should see them through.

Dungiven v Foreglen at Owenbeg, 5.30pm Sunday. Referee: Barry Cassidy
When these teams met in the league a month ago Dungiven scraped home by a point. Foreglen won the 2019 intermediate title and got promoted to senior. Since then they have lost quite a number of players to emigration but have still kept up a decent standard. Dungiven are rebuilding but if Foreglen are at full strength they could damage the brickwork!

Drumsurn v Doire Trasna at Celtic Park, 8pm Friday. Referee: Gregory McWilliams
The Division 1B winners Drumsurn face a Pearses Doire Trasna team that finished close to the bottom of the division below. This Drumsurn team scored loads of goals in the league and they should add a few more here.

Glenullin v Slaughtmanus, 3-30pm Sunday at Glenullin. Referee: Harry Tohill
Slaughtmanus caused quite a ripple by beating Glenullin at this venue on the opening day of the league. Since then they have failed to follow on while Glenullin have improved. Hard to see Slaughtmanus repeating their opening day feat.

Castledawson v Faughanavale at Castledawson, 5.30pm Sunday. Referee: Martin McErlain
In the recent league meeting between these teams Faughanvale beat a watered down St. Malachy’s by 23 points. The ‘Dawson will be stronger this time but so will Faughanvale. Joe Gray has welded Faughanvale into a very cohesive team and they should again but will get a stiffer test.

Greenlough v Glack at Owenbeg 2pm Sunday. Referee: Ciaran McDonald.
Holders Greenlough should be too strong for a Glack team that seem to play their best football at home. The big Owenbeg pitch will suit Greenlough whose forward line led by Niall Loughlin and veteran Enda Lynn can open up the Glack defence.

Steelstown v Lssan at Steelstown, 3.30pm Sunday. Referee: Richie Donaghue.
Like a lot of the other games this one has a lop -sided look about it. Lissan have lost all their games to date this year and they just scored one victory in 2020 and that was a shock win over Glenullin. Steelstown lost narrowly in the final last year. They are quite capable of going all the way this time.

Doire Colmclle v Desertmartin at Celtic Park, Wednesday 7.30pm. Referee: Damien Harkin
If championship favourites Desertmartin lose this one it will be the biggest shock since David slew Goliath! The Colmcille’s have had a poor year and it is hard to see it improving here.

Magilligan v Caigbane at Magilligan, 1pm Sunday. Referee: Martin Donnelly
This is a repeat of last year’s semi-final at Dungiven wich was won comfortably by Craigbane. Magilligan usually play their best football at home and while Craigbane must be fancied it may be a lot closer this time.

Sean Dolan’s v Drum at Dolan’s,1pm Sunday
Dolan’s have had a decent league campaign finishing in mid table with six wins and a draw from their 13 games. In contrast, Drum had just one victory with only Doire Colmcille finishing below them. Dolan’s have a very settled team at present and unless Drum make a dramatic improvement it should be a home win.