Three games down for decision on Friday night 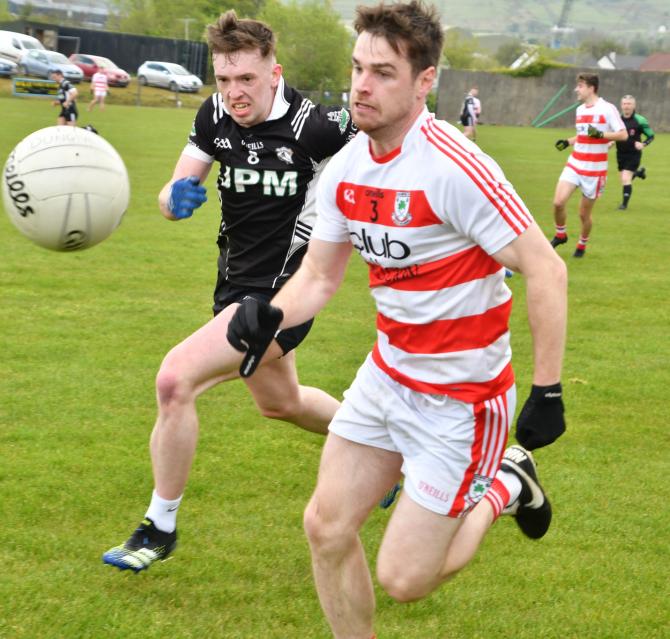 Ballerin lost to Desertmartin in the Junior Football Championship on Friday night.

IT'S a big weekend in Derry GAA circles this weekend as the championship continues apace.

They are both the St. Mary’s and they are part of the same parish but in recent years it has been Faughanvale who have had the bragging rights but generally the games have been close.

The last meting of the teams was in the league at John McLaughlin Park and it took a strong second half by Joe Gray’s very fit team to clinch a four point victory.

In round one, Slaughtmanus lost away to Glenullin but just before half time lost top forward Conor McGee to injury.

They were already missing another key forward in Gavin McShane who has been out injured for the past two months.

Faughanvale made the trip to Castledawson and made heavy weather of carving out a late one point victory at The Broagh.

Paddy O’Kane and Eugene O’Kane scored five points each on a day when they got a tighter than expected game.

Given the Slaughtmanus injury problems it looks very much like another Faughanvale success.

Glenullin had a comfortable home win over Slaughtmanus in round one with Eoin Bradley ruling the roost.

Castledawson lost at home to Faughanvale by a point but it was one of their better performances.

This result could hinge on the availability of Eoin Bradley who took ‘Dawson apart in their league meeting.

While they may not be the force of few years ago, Castledawson seem to step up to the mark when the championship comes around and with Niall Keenan now available they will not be found wanting.

It is one of those games that could well end in a draw.

Craigbane will be expected to bounce back from their shock defeat at the hands of Magilligan when they meet Ardmore at Gerry Crossan Park.

While Ardmore have improved and have built up a sizeable panel of players, their lack of scoring ability has been their downfall.

They lean heavily on experienced full forward William McLaughlin to get scores and unless he gets a lot more support than usual they will struggle once again.

Craigbane were not at their best away to Magilligan in round one where they lost by 2-11 to 0-12 and had key forward Fergal Mortimer set off, possibly in a case of mistaken identity.

They have been playing without injured full forward Lee Moore for most of the season but with a strong midfield of Ryan Mortimer and Jude Og Moore they will be fancied to win easily.