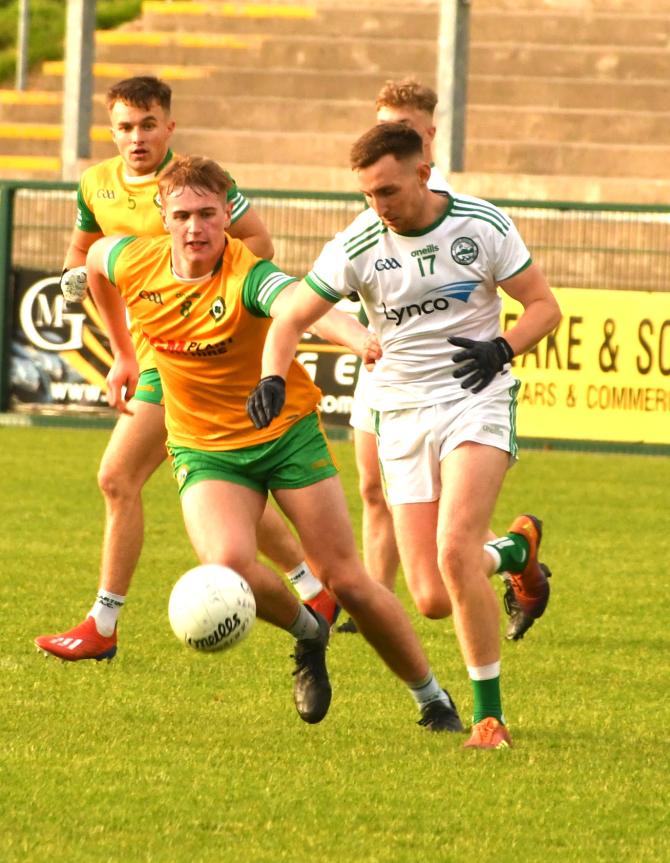 DESERTMARTIN WON the delayed 2020 junior final at Owenbeg back in June with a narrow victory over Craigbane.
Now, four months on, they look set to be crowned champions again when they take on surprise team Dolan’s at Celtic Park on Saturday.
Ballerin and Craigbane would have been considered strong challengers to the Saint Martin’s but they met in the quarter-final so out went Ballerin.
In the rerun of the 2020 final Desertmartin totally outclassed Craigbane winning by 1-14 to 0-4.
It was a performance that indicated that the winners have moved miles head of any other team in junior football in the county.
Unfortunately for them, there is no promotion this year so they are stuck at the lowest level for another season.
A much improved Dolan’s team surprised Magilligan in the quarter final even without ace forward Odhran McKane who was under suspension.
They won by 0-12 to 0-11 but had they availed of more of the chances that came their way they could have won by at least six points.
Their win over a good Moneymore team deservedly took them to the final. They were victorious by 0-11 to 0-7 due to a strong finish and three points from Kevin Nixon.
Nixon is one of the fastest players in Derry football, despite being 41 years of age. He is a fireman and trains daily.
He scored his team’s last three points to see off the Moneymore challenge at a stage when all around him were gasping for breath!
Desertmartin have to go back to 1967 for their last junior title having won previously in 1959.
However, for most of the intervening years, they would have been playing at intermediate or senior level where they have picked up county titles.
People often wonder where the name Dolan’s came from. The club was originally named Pearse’s with club founder Sean Dolan then the Derry County Secretary.
He was a musician and Irish speaker. He was interned and that broke his health, he died a young man. The club name was then changed to Sean Dolan’s.
Originally based in the Waterside area of the city they relocated to Creggan during the seventies.
They clung together in troubled times and just when they were going well again their clubrooms were maliciously burned down.
Now they are constructing an indoor playing and training area at their base overlooking the city on Piggery Ridge.
They have a thriving youth policy with boys and girls teams doing well and have strong support from the local community.
They won the title in 2008 beating Drum in the final. That was their only success at county adult level.
Their manager and former star player Kieran Wilkinson has them very fit. He well knows that they face a massive task to unseat the champions but they will not be lacking in spirit.
Their fitness and strength on the ball is an area where they can prosper.
Their ace forward is Odhran McKane and he along with the McCosker brothers, Kevin Nixon, Ruairi Thompson and brilliant goalie Ryan McLaughlin will make the champions work for every score.
Dolan’s need to get goals and that is something that has been lacking all season.
They will find the Desertmartin door hard to kick open. The South Derry side has conceded just five points in their two knockout games.
They beat Doire Colmcille by 5-10 to 0-1 in the quarter final and in the semi thrashed a strong looking Craigbane team by 1-14 to 0-4.
They have three of the Derry minor team that won the 2020 All Ireland minor title in their ranks.
They are brilliant forward Lorcan Murray who has been called into the Derry senior squad. The other two are Conor Shields and Ryan McEldowney.
They have a dynamic centre half back in Eunan McElhennon who got forward to sore 1-2 against Craigbane. Add in experienced players like Dermot Breen, Gregory McGovern, Enda McGuckin and Aide Trainor. It looks very much like a title winning combination.