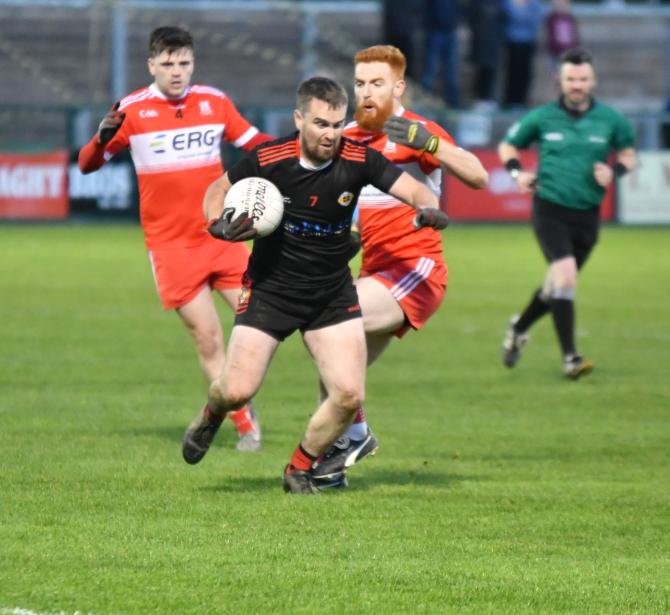 Holders Greenlough easily accounted for Drumsurn in their semi-final.

CITY side Steelstown are fancied for the Intermediate title when they face Greenlough at Ballymaguigan at 2pm on Saturday, writes Bernie Mullan.

As this is the 50th year of the Lee, Bateson and Sheridan Cup, the Ballymaguigan club will host the final with county committee permission.

It pits the holders Greenlough against an exciting Steelstown team who have lost in three previous finals.

Both had little difficulty in winning their semi finals last week but Greenlough lost midfielder Marty Kane to a red card.

Barring an appeal, the former Cargin player will miss the game.

Defending champions Greenlough showed their intentions of holding on to the trophy with a 1-13 to 0-06 win over Drumsurn in last weekend's semi-final.

Stephen Bradley scored a first half goal from the penalty spot to help secure a convincing victory.

Meanwhile, the talented Ben McCarron scored an impressive three points from play, plus two frees, as he helped Steelstown to a 2-19 to 1-08 win over Limavady in the other semi-final.

Steelstown and Greenlough teams met in the final at Bellaghy last year in a downpour with the latter winning narrowly.

The tight Bellaghy pitch was not to the liking of Steelstown while the Ballymaguigan ground is also fairly tight.

For the city side to win they must curtail Niall Loughlin and Enda Lynn and that will not be easy. On the other hand Greenlough manager Joe Cassidy will have to make plans to curb Ben McCarron, the brilliant Steelstown attacker.

Around the middle third Steelstown look to be the stronger but they will find Greenlough an experienced and dogged outfit who will make they battle for every ball.

It looks to be another close contest with Steelstown’s overall balance taking them to a first ever title.