Derry champions fancied to get better of Tyrone opponents at Maghera 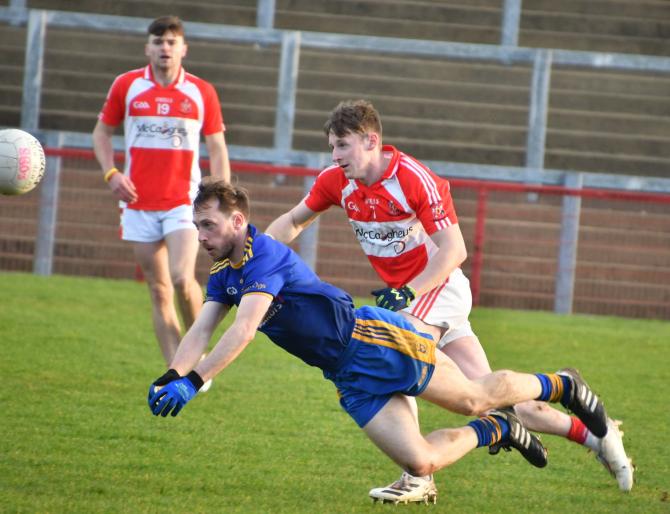 A CONTRAST in styles and a contrast in population but the beauty of the GAA is that teams can be equal no matter what population base they come from.
Both these teams might have ‘town’ in their names but that is where the contrasts ends. Steelstown, once a village on the north western edge of Derry city, has now merged into the city which has a population of well over 80,000. They have one of the largest number of active footballers in the county.
Moortown is situated on the western edge of Lough Neagh in a totally rural setting. They are squeezed in between a host of other clubs with Ballinderry and Ardboe on either side.
Despite a relatively small population they are a very progressive club with a full range of football, camogie and ladies football teams. The main landmarks in the area are Kanturk Cultural Centre and The Battery Inn.
Tyrone clubs have been successful seven times in this championship. Moy, Pomeroy twice, Cookstown twice, Trillick and Brackaville have been successful.
Craigbane were the first Derry team to win title - that was back in the year 2000. They also won in 2011 while Coleraine in 2006 was the only other team to clam the title.
Until recently Moortown would have played in the Tyrone senior championship which they had won in 1941, 1942, 1950 and 1992. Over the years they have produced some great players, including the Lawn brother, who won all Ireland medals with their county.
Steelstown will pit their pace and forward power against a dogged and well organised Moortown team. In the semi final against Randalstown the Moortown men went four points down early on but gradually wore down the Antrim champions to win in a tight finish by 0-9 to 0-8. Prior to that they had scored a comfortable victory over Erne Gaels of Fermanagh by 3-12 to 2-5.
Steelstown have had the extra game being drawn away to Donegal champions Cloughaneely in the preliminary quarter final. Despite dominating for most of the game they emerged 0-13 to 1-8 winners after a less than convincing display.
Next up they looked in trouble at half time against Monaghan’s Donaghmoyne, trailing by 2-4 to 1-4 at Celtic Park. It was in the second half that they at last believed in their own ability with a quite breathtaking display. They simply blew Donaghmoyne away to win by 4-13 to 2-7. Donghmoyne were strong favourites for the title.
Butlersbridge from Cavan provided the semi-final opposition at Ederny but it proved to be a cruise for the Brian Og’s who won by 5-13 to 0-10 but again they had made a slow start.
Moortown manager is Michael Hassan and their captain is full forward Ryan Kelly. They have Tarlach Quinn and Blaine Ryan at midfield and this is an area where Steelstown can get a grip. Ryan Devine has the power and Oran McMenamin the pace to keep the Moortown pair on the back foot.
Defensively the Tyrone side is very strong. Michael Devlin and Christopher McGuigan man the centre with Conor McVeigh and Brian McLernon attacking wing backs.
Steelstown just love teams who play attacking football. It allows them to counter attack at pace with Derry county player Ben McCarron conducting the lively front line.
Nine goals in their last two games indicates the potency of the Derry champions’ attack. McCarron, Cahir McMonagle and Eoghan Bradley are deadly finishers. Against Butlersbridge the main scorers were Ben McCarron 2-3, Eoghan Bradley 1-2, Neil Forrester, the team captain, and Mark Foley 1-1 each, Cahir McMonagle 0-3.
A strong factor in manager Hugh McGrath’s locker is the strength of his bench. He can call on the likes of Morgan Murray who was their top scorer in the league, the tall and fast Rory Maguire, the vastly experienced Mickey McKinney and the versatile Shane O’Connor.
Pitches can get a bit heavy at this time of the year and that would suit the solid Moortown men. It would give them a better chance of closing down the Steelstown runners. If they struggle to match the Steelstown pace then they will be in serious trouble.
Steelstown have always had good players but at times they seemed to lack belief in their own ability. Manager McGrath now seems to have given them that much needed belief and they will be seen as favourites to take an unexpected Ulster title.