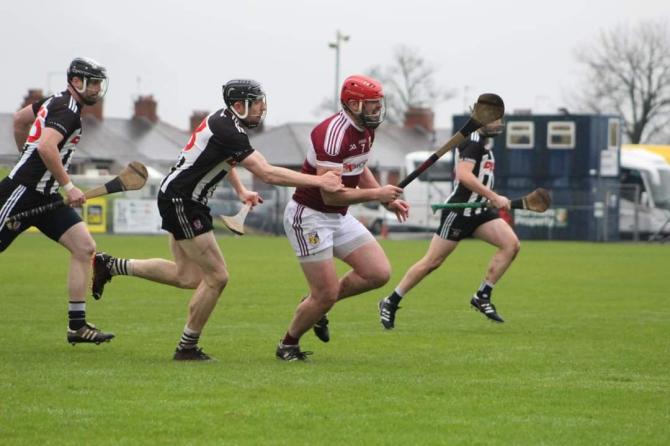 ULSTER Intermediate club hurling champions Banagher head west on Sunday to take on a fancied Kilmoyley team from Kerry.
The game at the Connacht Centre of Excellence will be played beside the biggest indoor sports dome in the world. The dome can house a full sized GAA pitch and now regularly hosts inter county games. It is believed to have cost over three million euro.
Banagher and Kilmoyley will be out in the fresh air hoping to claim a place in the All Ireland final against either Toreen (Mayo) or the winners of Naas (Kildare) and Oylgate Kilbrien (Wexford).
Banagher are rank outsiders for this game even though Kilmoyley, like themselves, are playing in the semi-final for a first time ever.
With the other counties around them being so strong the Kerry champions play at intermediate level even though Kilmoyley have won the Kerry senior title on 26 occasions.
For Banagher the task is massive.
At inter county level Kerry play at a higher level than Derry and this Kilmoyley team is studded with county players.
They are based in the village of the same name in the north west of their county, close to the famed Banna Strand and ten miles north of Tralee.
They are one of nine senior hurling clubs in the county which has 64 clubs where football is the predominant game. Most of the hurling is based in the north of the county. Their playing fields are in an area called Leering!
To get to the final they had to overcome serious opposition.
In the quarter final they beat Tipperary champions Moyne-Templetouhy by 4-12 to 0-14.
They then got a close call in the semi-final before overcoming Dunhill of Waterford by 1-12 to 2-7.
In a brilliant final played in Limerick they beat a hotly fancied Courcey Rovers of Cork by 0-24 to 0-21 after extra time.
Corner forward Maurice O’Connor was the man who led the way when Courcey Rovers looked like taking a firm hold on the game.
Paudie O’Connor was outstanding at midfield and when it came to taking frees Danial Collins was impeccable.
Goalie J.B O’Halloran has only been beaten twice in their entire Munster campaign.
After being eliminated from the Derry senior championship Banagher dropped to the intermediate grade where they got the better of Swatragh and Lavey with their cast iron defence paving the way.
In Ulster, with 14 men for three quarters of the game, they beat Middletown of Armagh thanks to a late goal from Pauric McCloskey.
In the final at Omagh they struggled through the first half but second half goals from Ciaran Lynch and Brian Og McGilligan pushed them on to a comfortable 2-11 to 0-12 victory over Lisbellaw of Fermanagh.
After having to sit out the Lisbellaw game due to suspension, Banagher have midfielder Oisin McCloskey back for the biggest game in the club’s history.
With his years of experience at both club and county level he will link up again with Brian Og McGilligan to give them what could be a foothold at midfield against O’Connor and Flaherty.
Banagher’s strength lies in defence. Goalie Darrell McDermott, full back Ruairi McCloskey and centre half Darragh McCloskey, flanked by Niall Farren and Mark Lynch, present a formidable barrier to any forward line.
The attack has not been making the best use of their chances this season but against Lisbellaw they did show signs of improvement with Ciaran Lynch, Liam Eoin Campbell and free taker Tiernan picking off some nice scores.
Banagher have been underdogs in virtually every championship game they have played this season so they will not be flustered by being the complete outsiders of the four teams left in the competition.
Their experience, defensive ability and physical strength will make them stubborn opposition for any team at this level.
Manager Ryan Lynch will be hoping that his team will make a better start than they have had in most games in the campaign.
If they allow the high scoring Kerry side to set the pace it could be a difficult outing.
For the likes of 38-year-old full forward Sean McCullagh it is the peak of his career to be playing in an All Ireland semi final.
Along with the other thirty somethings in a squad mostly made up with McCloskeys, McGilligans, Lynchs Farrens, McDermotts, Murphys and O’Kanes this tight knit group will not be travelling to Claremorris to make up the numbers.
For Sean Roe McCloskey, who has been a great servant of Banagher hurling, it will be a great day to see his four sons Ruairi, Oisin, Darragh and Tiernan line out for the St. Mary’s club in an All Ireland hurling semi final.