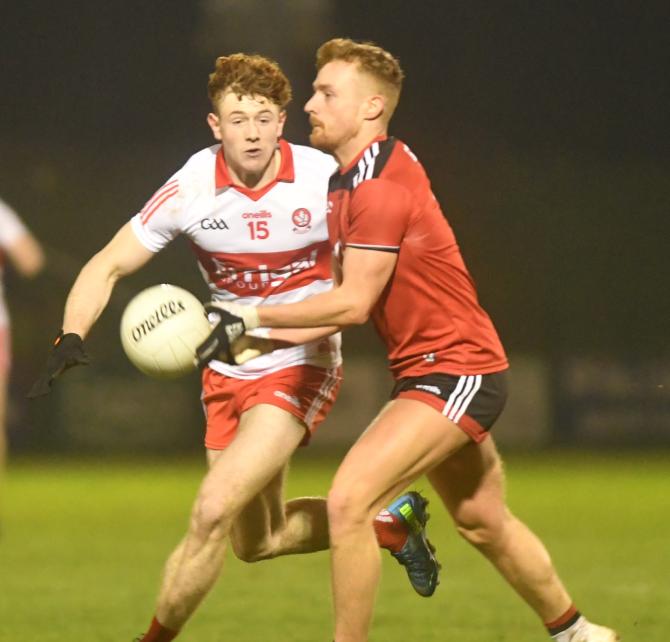 Derry travel to Roscommon on Sunday.

FOUR easy wins from four, an average winning margin of nine points and a team in top form with the best defensive record in all four divisions but promotion is not yet guaranteed.
Three games to go and none of thM will be easy - particularly the trip to Roscommon on Sunday.
The Rossies, as they are popularly known, are a point behind Derry having been held to a draw by Clare who in turn were well beaten by Derry in the last round.
It is 14 years since these teams last met; that was at Clones in the 2008 qualifiers, a game won by Derry. For two counties that have been reasonably strong over the years their meetings have been sparse.
Perhaps the most famous meeting between the sides was actually at minor level back in 1965. It was the All Ireland semi-final and Derry won by 4-8 to 4-5 in a game dubbed as the ‘match of the golden goals.’ Derry went on to beat Kerry in the final.
Roscommon easily beat Down in their last outing by 1-18 to 0-10 and in the first round they hammered Cork. Their other victory was over Meath but they still have to face league favourites Galway.
Manager Rory Gallagher has brought a consistency to Derry that has been lacking in previous years. Their victory over Clare was their 11th in succession coming up through the divisions. In those 11 games they have just conceded four goals, none of them in the current campaign.
Statistics might suggest that Derry are a defensive team but that is not the case. They are relentless at the back and move swiftly to the counter attack. Behind the defence is the powerful figure of goalie Odhran Lynch whose pinpoint kick-outs can be the springboard for many attacks.
The two tall Glen midfield men Conor Glass and Emmett Bradley are excellent with Glass often a shield in front of the half back line, leaving Bradley to do the attacking.
While the Derry attack has been registering good scores they have also been missing quite a lot as well. The goal scoring has improved but a tendency to over elaborate has cost other scores at times.
The panel has grown strong with the addition of young players like Matthew Downey and Lachlan Murray who has scored in every game he has played in.
Derry have yet to be at full strength for any of the four league games to date. Padraig Cassidy has been struggling with a groin injury while Ciaran McFaul and Gareth McKinless did not start against Clare after missing the win over Cork with hamstring injuries.
Some of the Derry players have made a marked improvement this season, none more so than Padraig McGrogan who has developed from a good corner back to an excellent centre half.
His club mate Conor Doherty is emerging as an impressive wing half back. Conor McCluskey has been the find of the season. From being a bit part player he is now a confident and tight marking corner back.
Overall, the panel has got stronger. Against Clare they were able to bring Ciaran McFaul and Gareth McKinless off the bench to copper fasten the victory. There are other players on the fringes like Shea Downey, Jack Doherty, Paul McNeill, Ben McCarron, Niall Toner, Declan Cassidy and Matthew Downey who could fit comfortably into the team.
Experienced manager and much travelled Galway man Anthony Cunningham has brought a bit of consistency into his fairly experienced team.
Their main danger man is Conor Cox. The full forward was born in Kerry but qualifies for Roscommon due to his parentage. He is good on frees and from play is accurate with both feet. The task of quelling him will probably go to Derry captain Chrissy McKaigue who has mastered any forward he has marked to date.
Enda Smith, who leads the attack, is a master at getting goals. In the middle of the field the powerful duo of Ultan Harney and Eugene Nolan will give Derry’s Glass and Bradley plenty to do.
Defensively Roscommon have been conceding an average of three points more than Derry and scoring slightly less.
The loser of this game could well be out of the promotion race as both have to play Galway who have had four comfortable victories to date. Derry are in a slightly better position than the Connacht side who dropped a valuable point against Clare.
The two promotion spots look to be between Roscommon, Derry and Galway. The teams who look set to struggle to avoid relegation are Meath on two points followed by Down, Cork and Offaly.
Cork, who had been hinted as the team to watch, have serious defensive problems - conceding an average of 20 points per game. They are already out of the promotion race.
No doubt Rory Gallagher will be reminding his players that three of their victories have been against the teams at the bottom on a point each. Prior to beating Clare the Banner men had two draws and one victory.
Roscommon are a big step up from any team they have met so far but with an improvement being shown in every game so far Derry will be confident.
Statistically, Derry have more clubs than Roscommon who have 32 to Derry’s 40 but that does not count for much given that Cork, who are joint bottom, have 259 clubs!