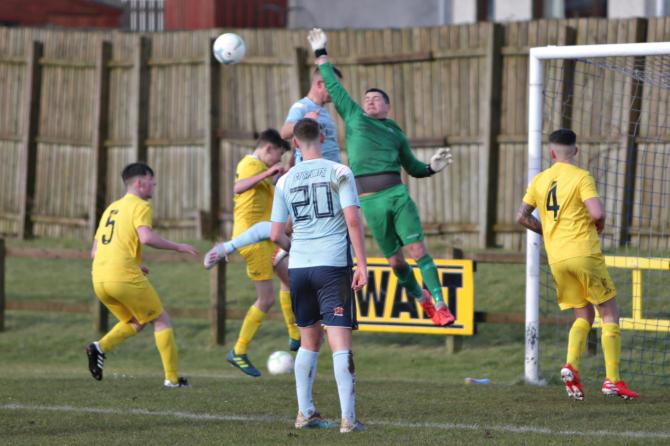 PORTSTEWART had to rely on a late winner to work their way through a difficult encounter in stormy conditions to edge out Limavady at Mullaghacall.
Saturday's result now sees the Seahawks level on points at the top of the league table with Annagh United, while the loss for the Roesiders places them second from bottom in the league standings.
It was Portstewart who opened the scoring on 22 minutes with Thomas Elder collecting the first goal. United's Ryan Doherty was able to grab an equalizer four minutes later which kept the sides level for much of the game.
The second half remained a close affair with both sides cancelling each other out until 12 minutes from time when former LUFC player Johnny Watt scored and secured victory for the home side.
Limavady United will be disappointed not to have left with a point having competed well for much of the game but they should be buoyed with an improved team performance off the back of conceding five goals last week.
Limavady United team manager Mark Clyde spoke to Constitution Sport after the game and had approving words about the game.
“In comparison to last week the performance was really positive,” he said.
“We played well in large parts of the game and we were unlucky not to get something from the match.”
He continued:“It's fair to say that Portstewart had a bit of good fortune for their first goal.”
“In terms of improvement, the work rate in the game was much better than previous games. There was minimal errors against a side pushing for promotion which shows the learning is starting to get through.”
Mark Clyde has stated numerous times this season that he is looking at the bigger picture of improving Limavady United as a club and knows that introducing new talent is crucial to the club's development.
“Major positives to take from the game is that we had five players under the age of 19 yesterday, three of who were just 18, one 17 and one 19.
“All of the young lads did themselves justice and are really pushing themselves to be ready for next season,” he admitted.
“Along with the young lads, the senior lads (all in early 20s apart from two) have shown a great attitude towards the younger lads and I think they can now see what is coming through and they are really sticking together to help each other.
“Myself and Lee have spoken about the performances and I think we can both say that we are seeing signs of a very good young team being formed which is exciting for all involved. I just hope they can get a couple of results to reward the work they have been putting in and also for some of the good performances when we have came away with nothing.”