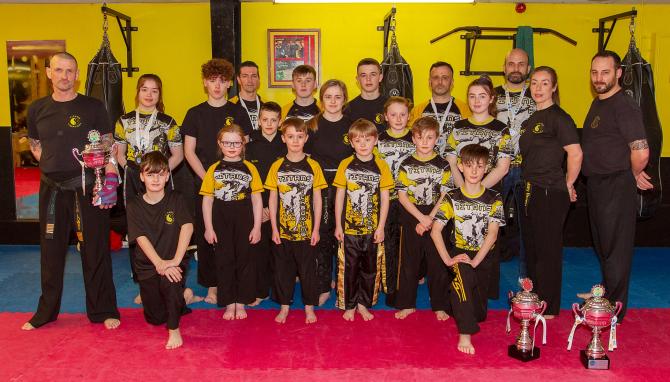 LOCAL KICKBOXING Club, the Limavady Titans, returned this week from a successful Irish Open Kickboxing Tournament in Dublin.
The Irish open is the largest Martial Arts tournament in the world and this year almost 4000 fighters attended representing countries from all over the world.
The event starts on the Thursday of the competition weekend, with weight checks and medicals, the fighting starts on Friday morning continuing through until the Sunday evening.
The ‘Open’ is a non profit tournament with all monies raised being donated to the NSPCC.
As you would expect with the number of top competitors from around the globe, it is certainly one of the hardest tournaments to make the podium.
Those who didn’t make it this time around will definitely benefit from the experience as they go on to future events.
Medal winners on this occasion from the Titans were as follows; Junior female fighter Niamh Brown who won double bronze one in each of her two sections.
Mary Brown won double gold in the Ladies sections putting on a great display of dedication and mat craft.
Stephen Lindsay, in his first appearance at the ‘Open’ made the final in his weight class, and was unfortunately just beaten by a Dublin based fighter from the Bushido Martial Arts club.
Ronan McCann took bronze in his weight class, in his second ‘Open’, on both occasions has made the podium.
Chris Dunne got a very well deserved silver medal in the 84kg weight class.
He won three fights to get to the final but was only very narrowly beaten by a fighter from Scotland.
The Titans Chief coach Willie Lowry said: “Chris was for me the Titan clubs fighter of the event, for the way he fought throughout his four fights and showed some great class and skill.”
Titans chief coach Willie Lowry was triumphant in his own class taking first place, by beating an Italian, Irish and an English fighter on route to the final where he then defeated a Canadian fighter.
Next up for the hard training and dedicated fighters from the Limavady Titans is the Battle of the North Competition, which takes place in April much closer to home, at the Foyle arena in Derry/Londonderry.