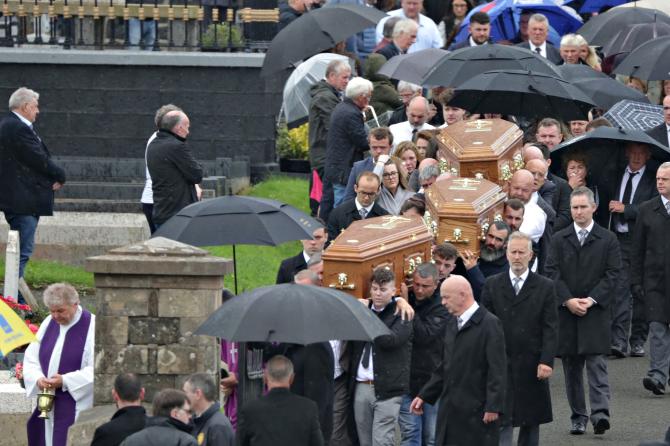 HUNDREDS of mourners lined the streets of Kilrea on Friday morning to say farewell to three members of the same family killed in car crash outside Portglenone earlier in the week.

Husband and wife Paul and Varena Creelman and Mrs Creelman’s brother Philip (Phil) Hegarty died when their silver Volkswagen was involved in an incident with a black Audi at around 10.40am on Lisnahunshin Road last Monday (July 27).

On Friday the town came to a standstill as people turned out to witness three coffins taken from family homes in Coleraine Street to St Mary's Church in Drumgarner for requiem mass.

In his homily Fr Ciaran Hegarty, curate of Urney and Castlefin and a relative of the deceased, told mourners that the sudden deaths of the three family members had left “a gap that can never be filled”.

“Kilrea just won't be the same without catching sight of the three of them walking down the street. Coming home will be a lot less special because Paul, Varena and Phil won't be about,” he said.