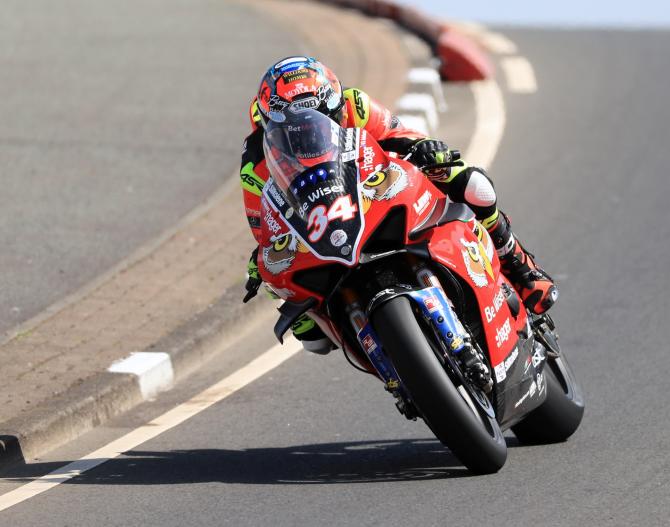 NORTH West 200 record wins holder Alastair Seeley has admitted that he is happy with his progress after a positive start to the 90th-anniversary race schedule.

Seeley slotted into third position on the timing screen after day one at the Triangle circuit but has admitted that with some fine tuning and a bit of luck, he can climb to the top of the pile tomorrow.

Speaking to Chronicle Sport, the 24 time North West 200 winner said: “We are in a good position after day one but it is all about bedding your way into it.

“We had a slight issue with the Ducati which meant we could not get on full throttle but the boys made a change which made our package better.

“Hopefully on Thursday we can make another step in the right direction,” he said.

“I am happy with third at the minute but Thursday is a new day.

“It is about me being comfortable on the bike, I had a positive debrief with the team so we are in a healthy position.

“We are 1.6 seconds off the top and I kept the same tyre in the rear for the full seven laps so it is pleasing that we can complete the full race distance,” admitted the Carrickfergus man.

Seeley was fastest in the opening Supersport session onboard the EHA Racing Yamaha R6, a bike which he is all too familiar with after a positive start in the British Championship. Fermanagh’s Lee Johnston was hot on the heels of the ‘Wee Wizard’ but Seeley is confident that he can improve on the 600cc in Thursday’s second qualifying session.

“We have only really changed the suspension setup from last year and Craig Fitzpatrick and the crew dial in the engines.

“We can always make adjustments so we will go away with the team, debrief, and see if we can make some adjustments to the Supersport aswell,” he added.

In the build up to this year’s North West 200, Seeley opted to sit out the Superstock class in an attempt to remain focussed on the Superbike and Supersport classes. With a wealth of winning knowledge around the 8.9 mile circuit, Seeley could well be the man to beat come Saturday’s main event.