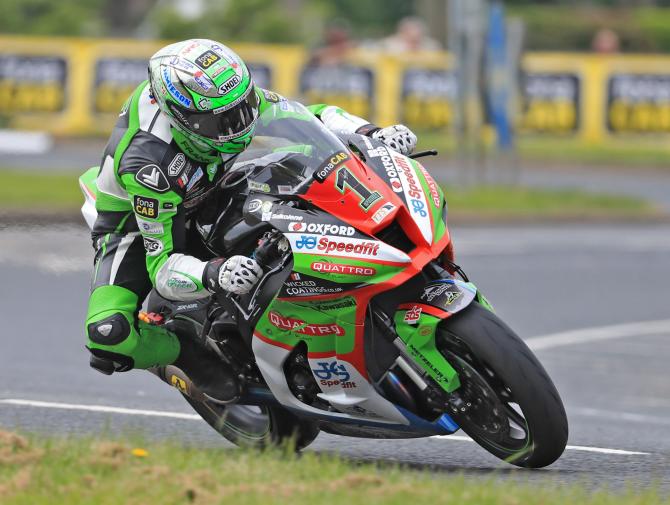 REIGNING International North West 200 Superbike champion Glenn Irwin has said that retaining his crown at the Triangle circuit would be a “fantastic” end to the 90th-anniversary celebrations.

Irwin has already set the tone for what may be a sign of things to come tomorrow as he unofficially smashed Michael Dunlop’s Superbike time from 2016. The Carrickfergus rider lapped the 8.9 mile circuit in 4min 21.767sec, 0.328 sec faster than Dunlop’s flyer from three years ago.

Speaking to Chronicle Sport, a relaxed Irwin said: “I would obviously love to win the race but it will not be easy.

“If I do win the feature Superbike race I am dragging the team back to the Anchor Bar for a night out just to make sure they all have a hangover on Sunday,” joked the 29-year-old.

The quality on the grid at this year’s event suggests that Irwin will not have it all his own way as Peter Hickman, Alastair Seeley, Dean Harrison, Michael Dunlop and co. Will all be vying to get their hands on Irwin’s title.

After a tough start to race week, Irwin highlighted that he has grown in confidence as race week progressed.

“After Tuesday’s session, it’s nice to be on pole position,” he said.

“We made a breakthrough with the bike which has helped us move in the right direction.

“The team have worked really hard to put a good package underneath me.

“One thing I have learned is that if you want to win at the North West 200 you can’t ride at eighty percent.

“You have to give it your all because that is when you enjoy riding here,” added Irwin.

Bumper crowds are expected to travel to the north Coast in what is hoped to be a truly memorable year for the International North West 200.

Spectators are reminded that roads will close around the circuit at 9:15am before racing gets underway. There is yet another action packed race day schedule with two Superbike races as well as Superstock, Supertwin and Supersport races.