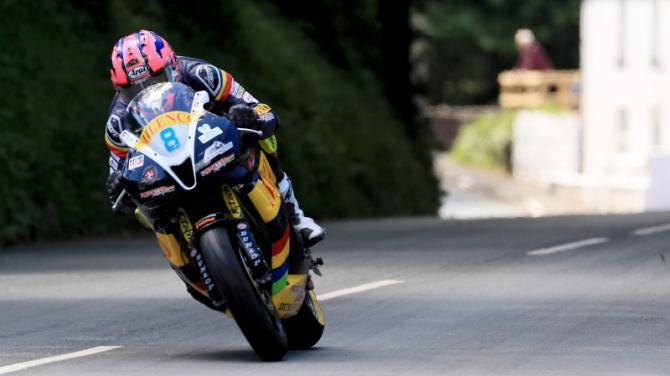 Davey Todd in action at the Isle of Man TT earlier this year onboard the Milenco by Padgett’s Honda Supersport machine. Picture: Pacemaker Press.

POPULAR road racer Davey Todd says that he is relishing the opportunity of racing at the Macau Grand Prix for a second time this week.

The North Yorkshire native travelled to the far east for the first time in 2018 where he piloted the PuraGlobe Syntainics Racing Oil by Penz13 BMW to a highly-credible ninth-placed finish. Todd finished just behind his then-teammate and popular Dubliner Derek Sheils, who emerged as the Irish National Superbike champion this season.

Speaking to Chronicle Sport at the annual end-of-season Sunflower Trophy races, the Saltburn-by-the-Sea rider said: “I'll be finishing off the season at the Macau Grand Prix with the Penz13 Team and I really can't wait to get out there.

“I travelled over there for the first time last year and it was absolutely fantastic,” he admitted.

“I really enjoyed it but I hope to hit the ground running, improve on last year, and I suppose it will be nice not to be a newcomer this time around.

“I haven't been a newcomer at most of the big races this year and I'm looking forward to seeing what I can do at Macau this time around.”

After another incredible year, which handed the 24-year-old his maiden International success at the North West 200 back in May, Todd admitted that his 2019 achievements outweighed his pre-season expectations. The former Supermoto champion also paid tribute to his former team boss, who handed him his debut on the roads in 2018.

“It has been an incredible year and if I'm being honest I thought it would have been hard to go better than what I did in 2018,” he said.

“It was an amazing year with the Burrows Engineering outfit in my debut season, John was fantastic and I thought it would be hard to stay on-a-power with that in 2019 but to carry on in my second season on the roads the way I have done makes me happy,” he revealed.

“We went to the North West 200 and won a race, I was on the podium at the Ulster Grand Prix, and I done over the 131mph marker at the TT which was totally beyond my expectation but I know I have so much more to give,” said a determined Davey Todd.

When quizzed about his plans for next season, the popular Yorkshireman admitted that although he has not put pen to paper with any team as yet, he is more than sure of the direction he would like to move in.

“I have nothing set in stone at the minute,” Todd admitted.

“We are in negotiations at the moment and my goal is to be back in the British Superbike paddock.

“I have done one season there in the past in the Superstock 600cc championship, I won a couple of races and I would like to go back to the British championship,” he added.

A popular figure on the roads, Todd is hopeful that he will be able to find a balance between the roads and the short circuits, a similar path of that taken by the likes of Peter Hickman and Dean Harrisson in recent seasons.

“I don't want to risk not doing the roads so my plan is to compete at the International road races as well, mainly the Isle of Man TT but I am hoping that I can do the North West 200 and the Ulster Grand Prix as well.

“I will just have to wait and see what plan works best for me but ultimately that is the direction I would like to go in.

“Ideally I would like to go to the Superstock 1000cc championship and build myself up over the next few years to make the step up to the British Superbike championship.”