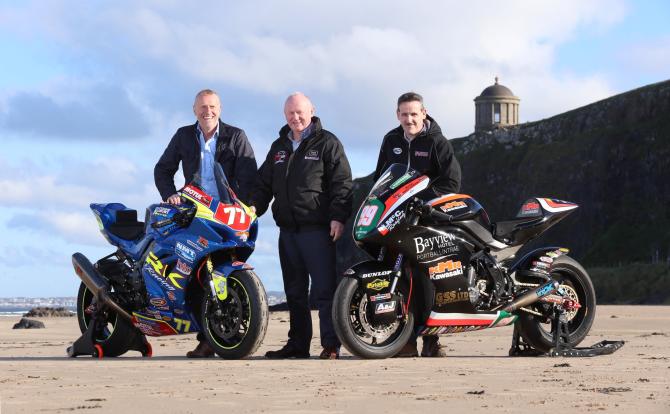 North West 200 Event Director (centre) pictured with representatives from Nicholl Oils and fonaCAB, businesses which will sponsor the North West 200 for the next three years.

The North West 200 has announced a new three-year title sponsor partnership with fonaCAB and Nicholl Oils.

The new sponsorship deal is set to run from 2020 until 2022 and comes as somewhat of a boost to the sport given the current financial difficulties being experienced by the Ulster Grand Prix. The Enniskillen 100 is already an absentee from next season's calender whilst the curtain-raiser Cookstown 100 is set to go ahead at the end of April despite reporting a £20,000 loss at last year's event.

The two Northern Ireland based companies were the principal sponsors of this year’s races that saw the north coast event celebrate its 90th anniversary. The 2020 races, which will be held on May 10-16, will be known as the fonaCAB & Nicholl Oils North West 200.

North West 200 Event Director Mervyn Whyte admitted his delight at getting the deal secured: "It is great news that fonaCAB and Nicholl Oils will return as title sponsors for the next three North West 200's.

"Their support is an indication of the platform the event can offer companies to promote their businesses and will help provide the Coleraine and District Motor Club with the financial security required to plan for the future of the races."

William McCausland from fonaCAB added: "We have a longstanding relationship with the North West 200 and our sponsorship of local riders has been consistent from the 1980ss through to current competitors Lee Johnston, Glenn Irwin, Jeremy McWilliams and Paul Jordan.

"I myself have a long history with the North West and have many happy family memories of attending the meeting from childhood."

Hugh Nicholl, the Managing Director of Nicholl Oils, was also delighted to confirm his company’s continued support as a title sponsor over the next three years.

"Nicholl Oils are a local business supplying oil products to homes and businesses throughout Northern Ireland," he said.