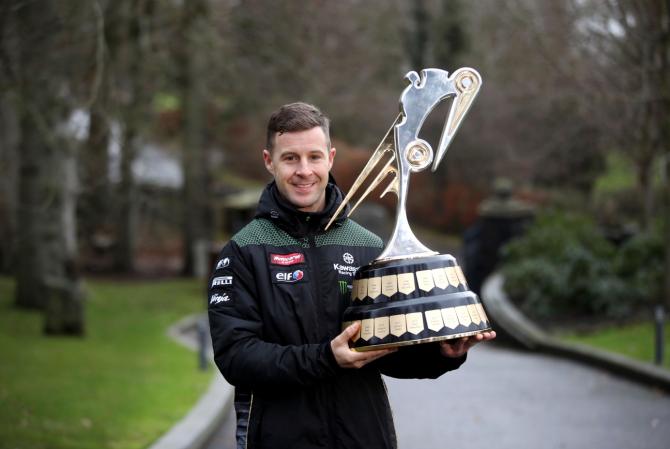 WORLD Superbike star Jonathan Rea is the Adelaide Irish Motorcyclist of the Year for a record breaking sixth time in a row.

Rea has now won Irish motorcycling’s top honour eight times to equal the achievement of road racing legend Joey Dunlop, who was an eight-time winner between 1979 and 2000.

There was little doubt that the Kawasaki rider would scoop the main prize following his sixth successive World Superbike title.

The 33-year-old received the famous Joey Dunlop trophy during a virtual online awards ceremony after the annual gala evening in Belfast was unable to be staged because of the Covid-19 pandemic.

“This is an incredible feeling,” said Rea.

“I am gutted I can’t receive this trophy on the night because it’s such an amazing occasion every January when all the motorcycling industry come together under one roof.

“I receive so much support from the fans there and I will miss seeing them all. This is an unreal trophy which will once again take pride of place as the centrepiece in my home.

“To equal the record set by Joey Dunlop is also simply incredible. He was my hero growing up and to think I have won this award the same number of times as him is hard to believe.”

Rea clinched a record breaking sixth World title in a row during a season affected by the Covid-19 pandemic.