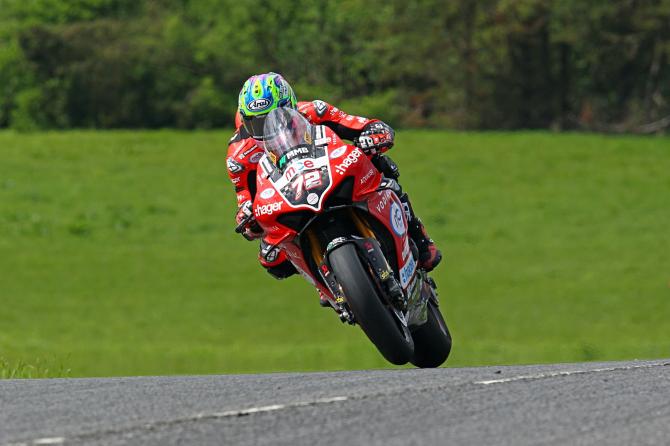 Josh Brookes topped the Superbike time sheets on the PBM Ducati during Tuesday's opening practice session for the 2022 fonaCAB and Nicholl Oils North West 200 on a day of sunshine and showers, writes Stephen Davison.

The Australian BSB racer, who last raced at the event in 2014, completed a sighting lap of the 8.9 mile circuit, in the opening Newcomer’s practice.

“As soon as we went out in the practice proper for the Superbikes I could ride my own way, get a feeling for the bike and lean it over in the turns,” Brookes explained.

“Luckily, the sun was out and we had the track completely dry so once I got into my own rhythm the track just came back to me.”

Michael Dunlop, who had originally been scheduled to ride for Paul Bird’s Ducati squad before the Ballymoney man ditched the deal several weeks ago, was second fastest, just 0.173 seconds slower on his first outing on the Hawk Racing Suzuki he had taken delivery of the previous evening.

“We still have a lot of work to do for Thursday but we are here,” Dunlop said.

“We are happy enough to be P2 on a new bike,” Hawk Racing boss Steve Hicken added.

“Michael seemed happy with the bike and we have some changes to make now.”

Davey Todd was third fastest on the Milenco Padgetts Honda.

“I was really surprised to be up there,” the Saltburn on Sea rider said.

“The bike was overgeared and I was barely using sixth gear, so to be just 0.8 seconds off pole when I wasn’t pushing and was just getting used to the track is good."

Seeley’s Carrickfergus neighbour, Glenn Irwin, suffered a tough day at the office with machine problems on his Honda Racing Fireblade hampering his return to action at Portrush. After finishing fifth fastest in the Superbike session, the BSB star failed to qualify for the Superstock race after struggling with more technical issues.

Michael Dunlop topped the Superstock qualifying on his MD Racing Honda which was run on drying roads after a heavy shower doused the Triangle circuit. The outright lap record holder was 1.7 seconds faster than Michael Rutter on the Bathams Racing BMW.

“There were a lot of wet patches,” 50-year-old Rutter said afterwards.

“I got held up a bit on the last lap but the bike feels good and it is fast. I just need to do more laps so that I can get up to speed and have the trust to outbrake people at these high speeds.”

Richard Cooper was third quickest on his Buildbase Suzuki.

“The track was drier towards the end but I was still cautious in parts and was trying to pick my lines,” he said.

“I managed to sort out my braking markers which I never got to grips with when I was here in 2019 so that is something to build on for the rest of the week.”

Dominic Herbertson, a Tandragee 100 winner two weeks ago, was fourth fastest on his GB Racing BMW ahead of fifth fastest, Ian Hutchinson, on the Milwaukee Synetiq BMW.

Lee Johnston’s recent sparkling run of form on his Ashcourt Racing R6 Yamaha in the British Supersport championship continued as he was fastest Supersport rider on the opening day of action.

“It’s nice not to be behind Jack Kennedy for once,” Johnston joked, referring to his British championship rival.

“We are using different tyres on the bike here and it feels different. The conditions weren’t perfect and there was a lot of gravel at Juniper.”

Michael Dunlop was over a second slower on his MD Racing Yamaha with Dean Harrison third fastest on the Dao Racing Kawasaki, the highlight of a testing day for the reigning Senior TT champion who was hampered by a gearing issue in the Superbike session and the wrong tyre choice in the Stocker qualifying.

“The road was wet from Metropole to York but from York to Metropole it was bone dry,” Cooper explained after a torrential shower delayed the start of the Twin’s session.

“I was a little bit surprised to be second fastest amongst the best level of road racing in the world,” Bian, a former Manx Grand Prix winner who is competing in his first Supertwins race, said.

McWilliams admitted he struggled in his first ride at the North West on wet roads.

Earlier in the day the former Grand Prix rider had posted an impressive seventh quickest time on the Burrows Engineering/RK Racing Yamaha in the Supersport class, lapping faster than leading 600cc riders like Conor Cummins, Ian Hutchinson and James Hillier.

“A bike is a bike,” the Newtownabbey man said

“I’m pleased to be in the mix on a bike that I’ve only set eyes on but I wouldn’t take too much from it as everyone was feeling their way.”

Keep up to date with all the latest developments with The Chronicle.