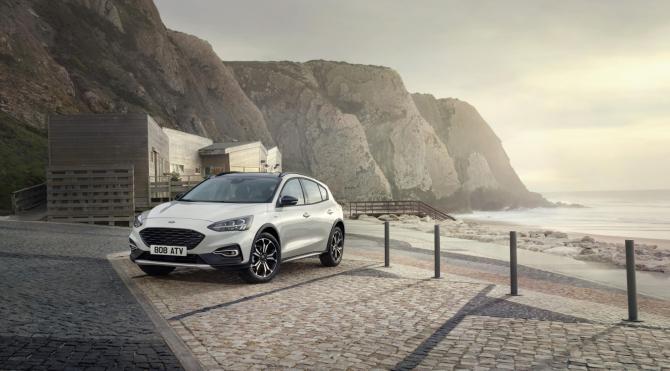 THE Ford Focus becomes the third car in the Blue Oval’s line-up to undergo the ‘Active’ treatment after the Ka+ and the Fiesta supermini. Why? Because this pumped-up version allows the company to pander to drivers infatuated by the current crossover craze.

Surprised? Don’t be. For instance, 40% of all Ka+ models sold in the UK last year were of the pseudo off-roader sort.
It would be easy to regard this new model, which is the penultimate piece in the Focus jigsaw prior to the ‘ST’ landing this summer, as nothing more than a five-door dressed up in some new clobber. In truth, it serves no real purpose other than to set the ‘Active’ and more expensive ‘Active X’ apart. However, people expect rugged and versatile when they think of a crossover, and Ford has obliged.

First up is a re-profiled front bumper laced in dainty plastic trim. This follows the contour of the wheel arches and continues along the sills before merging with the bumper at the rear. A gnarly mesh-style grille, Active badging on the wings and faux skid plates front and back complete the transformation.

Just like the Ka+ and Fiesta Active, the Focus alternative gets additional exclusive colours – ‘Orange Glow’, as seen here, and ‘Metropolis White’ – married to a contrasting roof colour. There is also a choice of fresh alloy wheels.

Practicality is unchanged in the tougher version. Therefore, the boot measures the same 341-litres when the rear seats are up and 1,653-litres when these are in the forward position as the everyday five-door. You can access it in the old-fashioned way, or specify a ‘hands-free’ option (£450), which works by waggling your foot under the rear bumper that, in turn, activates a sensor and raises the tailgate.

Passenger space is unchanged. Head, foot and shoulder room are on a par with the class best, as the Mk3 Focus sits on a longer platform. Deep and lined front door pockets, a large glovebox and central armrest storage bin, perched between the driver and passenger, free up interior space, as do the map pockets on the rear of the front chairs.

As already mentioned, there are two versions of this new Focus. Signature blue stitching on the embossed cloth seats, coloured accents on the upper dash and door cards, allied to silvered scuff plates are part of the cabin’s makeover in ‘Active’ form. Everything centres around the 8-inch touchscreen that is perched at the perfect height, when keeping tabs on the satellite navigation and other functions.

Pairing the mobile phone to it in seconds, the voice activation proves both reliable and straightforward to use. The main driver binnacle combines analogue dials and a 4.2-inch TFT display that can relay various items of driving information.

Some of the changes are not superficial. Beneath its skin, engineers have gone to town on the Focus’s original suspension configuration. Among other aspects, special springs and dampers have been fitted to work in tandem with a raised ride height to maximise comfort for users on a mix of surfaces.

It goes without saying that this is a pale imitation of a 4x4, even if you can call upon ‘Slippery’ (ice and snow) and ‘Trail’ (sand and gravel) modes for extra traction. Electronics-based, the dialable settings seek to keep the car moving forward by adjusting the throttle responsiveness, braking, stability and traction control to limit wheelspin.

Will owners use them? Yes, probably, if only to satisfy their curiosity. ‘Normal’ and ‘Sport’ are the go-to settings. The other question worth considering is whether the suspension mods have helped or hindered the Active. It would be easier to take away from the ride and handling, rather than add to it, but the latter applies here.

In fact, it is a much better behaved daily runaround than the car on which it is based. To use an analogy, the chassis glides over broken tarmac, as readily as a hot iron removes creases from a cotton shirt. Only a really bad stretch of road, driven at high speeds, can send the suspension into a spasm of unwieldiness.

For good measure, the Active is every bit the driver’s car; the front end is happy to be thrown around corners and the steering is perfectly power-assisted and full of feedback. Whether you are hustling through the countryside, or chalking up motorway miles, this car has all bases covered. How can it be summarised in one word? Brilliant.

The Active gets two petrol engines: the award-winning three-cylinder EcoBoost developing 123bhp and a 1.5-litre four-pot that is good for 158bhp. A 1.5-litre turbo diesel in two states of tune (118bhp or 147bhp) is supplemented by a 2-litre alternative that has considerably better torque despite being only as potent as the punchier 1.5-litre variant. There is also a transmission choice of a six-speed manual or an eight-speed automatic, with paddle shifters. We drove the larger 1.5-litre diesel coupled to either of them and concluded that the manual is far preferable.

On cold start-up, the unit is noisy but, once up to operating temperature, there is markedly less clatter. This is even less when manually-selecting the gears. The more convenient set-up makes the EcoBlue diesel coarse and uncivilised for a greater proportion of the time.

On the plus side, the automatic slips up and down the ’box effortlessly, while the rotary gear selector frees up interior space in the lower console. Using the manual, you can expect to arrive at 60mph in 10.8 seconds, while enjoying greater efficiency, lower road tax bills and a £1,450 less expensive list price.

Since September last year, 21,000 new-generation Focus models have been sold. The arrival of the Active, with its crossover looks, is only going to grow that number.