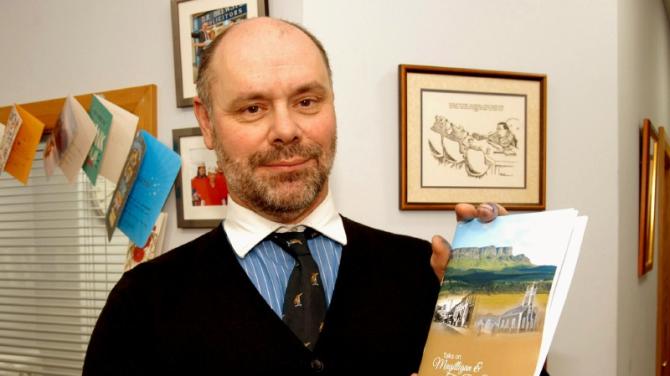 A WELL-KNOWN Limavady solicitor has paid a fitting tribute to his late father by publishing a book in his memory.

Following the death of his father, Harry, around 19 years ago, David Brewster was privileged to receive a series of handwritten speeches which his father, who was Chairman of the Roe Valley Historical Society, had given to various local groups.

David recalled: “My father presented a selection of talks over a period in the 1980s and 1990s to many different groups such as the Limavady Probus Club which he was also a member of and many others.”

He added: “Last year I decided to try and rescue them from various bits of paper that they were written on and typed them up.”

Originally from Magilligan, Harry was a headmaster of Highlands Primary School in Dromore before he retired in 1982, to pursue his passion of local history.

According to David, as well as history, his father had an abiding passion for Magilligan Presbyterian Church.

“He was the Clerk of Session at the church and in fact since its foundation, there has always been one ancestor of his that has been on the Session.

“So, because of the importance of the church to him, I decided that when the book was published that the money would go to the building fund.”

David added: “As for the book, it is not just about the church, it is about Magilligan and the Roe Valley generally, so anyone who has an interest in local history will hopefully take something from it.”

Following publication of the book, delighted David believes his father would have been proud of his efforts.

He said: “I can certainly say that I am very proud of the fact that my father’s work has now been rescued and not forgotten about.

“I knew these notes needed to be printed at some point because there is a lot of stuff in there that some people will know about but most people won’t, which makes it very interesting.”

David concluded: “I would like to thank William Willis from the Printing Company who did a great job.

“My father was a very modest man but I am sure that he would have been very chuffed to see something published in his name.”

The book is coming soon to local outlets but can be purchased now at D.R. Brewster Solicitors, Main Street, Limavady or through members of Magilligan church committee.

The book is priced at £5 but further donations will also be accepted.