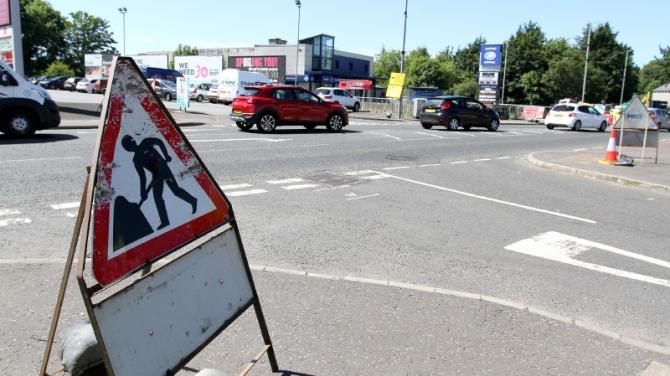 ROAD works in Ballykelly and Limavady are causing heavy traffic disruptions in the area adding to journey times and frustrating commuters.

Residents, commuters and business owners have had to deal with frustrating traffic congestion where major sewage works are taking place in Ballykelly on the main Limavady to Derry road.

Conor Hassan from Limavady travels daily through Ballykelly on his way to work at NWRC and has said “Going to work with normal traffic will usually take 20 minutes give or take but with the blockage in Ballykelly it can be anything between 45 minutes to an hour or more.

“The worst part is the junction at the bridge where there's other lanes trying to get in and it's just mayhem at times.

“Everything just grinds to a halt. It's not an ideal way to start your day at all.

“I decided going via Dungiven is a quicker route but there's still some road works going on there but the hold up is nothing compared to Ballykelly.”

Jean Moore, from Ballykelly said: “As a resident of the village I'm well aware of how essential it is for this work to be carried out, however the constant congestion means that a two minute journey to the local shops now takes anywhere from 10 to 20 minutes depending on the time of day.

“I walk to the shops but those with health and mobility issues have no alternative but to deal with the inconvenience of sitting in traffic for such a long time just to get groceries.”

“The entrance to my street is in the centre of Ballykelly so getting in and out can be a nuisance.

“The queues are bumper to bumper so you have to wait for traffic to start flowing and you have to depend on the consideration of other drivers to let you in and out.”

It is not just Ballykelly which has been affected by traffic congestion with several lane closures appearing in and around Limavady.

The Department of Infrastructure, the department responsible for the Roads Service said they aim to “keep any disruption to a minimum.”

A spokesperson said: “As far as possible the department aims to keep roadworks disruption on the strategic network to a minimum.”

The department said other necessary works on the main roads connecting Limavady to Londonderry and Coleraine had either been finished in advance of major works in Ballykelly, or delayed until afterwards.

“Due to the nature of the works at Ballykelly and Baranailt Road near Claudy it was not possible to delay further,” the spokesperson added.

“Other work on Irish Green street and Rathbrady Road has been purposely timed to be carried out during the summer period to avoid disruption to local schools.”

NI Water told the Northern Constitution work will stop for 10 days over the Open golf, but stress this work is essential and will recommence on July 22

A NI Water spokesperson said: “The potential for heavier than normal traffic due to the Open golf championship was taken into account when planning the work.

“Ballykelly will therefore reopen to two-way traffic from Wednesday July 11 to Sunday July 21. Work will recommence on Monday July 22.

“NI Water would like to stress that this work is essential to reduce the risk and impacts of 'out-of-sewer' flooding suffered in some areas of the community.

“A lane closure will continuously be in place and normal working hours will be 7am to 11pm, 7 days a week for the duration of the works.

“NI Water would like to thank the public for their patience and cooperation while this essential work is being done.

“We will do our best to complete it as soon as practically possible.”

East Londonderry MP Gregory Campbell has hit out at Transport NI over detours and road works in the North West area over the Summer.

He said: “It has now reached farcical proportions where roads between Londonderry and Limavady are being worked on to such an extent that other roads which could have been, and were being used to bypass the now notorious Ballykelly storm sewerage system works are also being worked on at the same time.

“The ludicrous position presently is that motorists who could have used the Baranailt Road at Claudy to bypass Ballykelly cannot do so as a result of the work on the Dungiven to Drumahoe dualling. It has now transpired that even when drivers continued along the Glenshane Road to avoid those roadworks to access the Baranailt Road at a further turn off, are this week faced with FURTHER road surfacing works on this road, necessitating yet another lengthy diversion.

“This is completely absurd.

“I have written to the Permanent Secretary of the Department of Infrastructure to request urgent action to remedy this utter shambles for motorists in the North West."