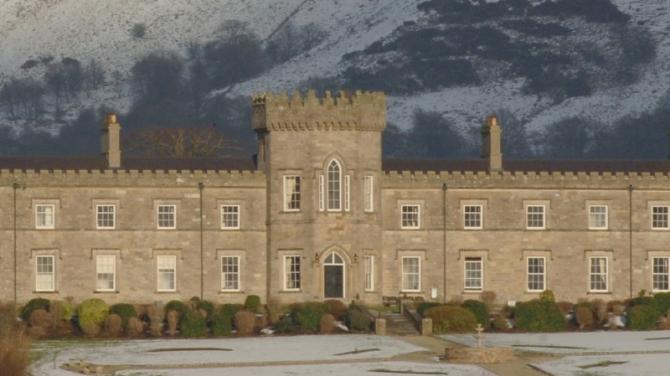 AN Irish language secondary school based at 17th century Dungiven Castle is to be extended as pupil numbers and the need for additional accommodation grows.

Sinn Féin Councillor Sean McGlinchey has welcomed the passing of a planning application for Gaelcholáiste Dhoire in Dungiven.

Civic planners have given the green light for an extension at the historic site to cater for “the present and future needs of the school's population and the wider community.”

Cllr McGlinchey said: “The passing of this application for Gaelcholáiste Dhoire not only enables them to extend to their existing building and associated grounds works but also grants the school another ten years for the temporary modular building they are currently in.

"This shows the continued growth and development of the Irish medium education sector and language.

"I want to congratulate the staff, pupils and Board of Governors at Gaelcholáiste Dhoire for their hard work and dedication to the school and wish them continued success in the future.”

The extension, south east of the Grade B1 castle at Main Street, will include general classrooms, science rooms, a home economics room and supporting ancillary accommodation.

When officially opened in March 2016 with 16 original pupils, the plan was that Gaelcholáiste Dhoire would remain for two years while the Department of Education conducted a feasibility study into future sites.

It was hoped the school would eventually cater for up to 400 pupils.

Site works for the next phase will include drainage, new pathways, fencing and gates to secure the school grounds.

Causeway Coast and Glens Borough Council's planning committee granted 'temporary' permission for 10 years for the retention of an existing previously approved building and the proposed extension.

Planning officers had recommended approval for the scheme after concluding that the proposed development was “acceptable in this location” and “appropriate in terms of its scale, lay-out and appearance.”

In a report to the committee, which met last Wednesday (August 28) at Cloonavin in Coleraine, the planners said the extension scheme was “sympathetic to the land uses within the locality and does not impact on the residential amenity of the neighbouring properties.”

There were no objections from neighbours and one letter of support from the Department of Education outlining the need for additional acommodation as the school continues to grow.

Planning permission was granted for the conversion of the castle into a school in September 2015.

Approval was granted for three years to allow for the establishment of a permanent location.

Over the years Dungiven Castle, the ancestral home of the O’Cahan clan, has seen many reincarnations.

It was a home for the US Army during the Second World War, a dance and music venue in the 1950s and 1960s, playing host to Tom Jones and Engelbert Humperdinck, amongst others, and until 2014, a boutique hotel.