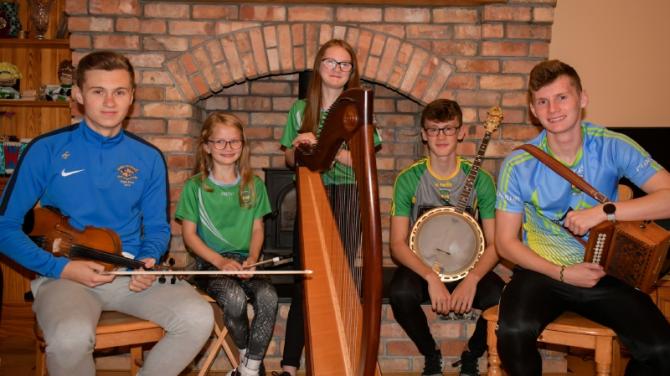 A TALENTED little lady from Glenullin has been celebrating recently after acheiving the title of All Ireland Champion at the 2019 Fleadh Cheoil which was held last month, in Drogheda.

Sinead Close, 12, was left speechless when she was announced as winner of the U12 Harp title at the renowned All Ireland competition which celebrates Irish music culture and attracts thousands of visitors each year from all corners of the country and indeed many parts of the world.

Speaking to the Northern Constitution, harpist Sinead recalled: “When I found out I had won I just couldn't believe it!

“I was up against 14 other candidates so I didn't expect to win.

“I think I am still in shock and disbelief to be honest.”

However, according to Sinead, who began playing the harp at the tender age of seven, winning such a renowned title has taken a lot of hard work and dedication.

She continued: “I have been playing the harp for five years now but there is still room for improvement, I want to get better and better!

“I practised every single day leading up to the competition but in the end I was glad that all of my hard work paid off.”According to Sinead's mother, Maeve, who is a talented musician herself, the 12-year-old school girl has emerged from a musical family and is the granddaughter of the legendary May Close, the founder of the Allen School of Irish Dancing, who taught thousands of talented youngsters over many years.

Maeve explained: “I play the piano accordion and my brothers and sisters play instruments as well.

“We grew up around music so it's safe to say that my parents are delighted that our children are doing the same thing.

“We are also involved in the Crosskeys music group and I would help take the group and they compete in the Fleadh.”

She continued: “My husband's mother was an Irish dancing teacher and she also played the piano accordion.

“In 1951, she competed in the very first Fleadh festival in Mullingar.

“Unfortunately she has passed away but she was a very talented lady who has certainly left a great legacy.”

According to Sinead's proud mum, a long journey to Cork when her daughter was nine months old will always bear significance in her mind.

“I decided I would like to play the harp before she was born but I didn't make a success of it because I was just so busy with my children,”explained Maeve, who was a mother to three boys at the time.

She continued: “It took three years to get the harp made and then we drove all the way to Cork to pick it up.

“Sinead was just a natural at playing it – she was always just picking it up and having a go then she began to receive lessons from Lauren O'Neill who is a fantastic teacher.”

Recalling her daughter's achievement at the recent All Ireland Fleadh Cheoil, Maeve continued: “We are all just so proud of Sinead, she practised very hard for the competition.

“We didn't expect she was going to win as there were a lot of other competitors so it's a bonus that she came home with a trophy!”

When asked about her next move, gifted harpist Sinead explained: “I'm going to just keep on improving my harp skills.

“I also play the flute and piano,so I really want to improve on them too -I just want to try and get better each year.”