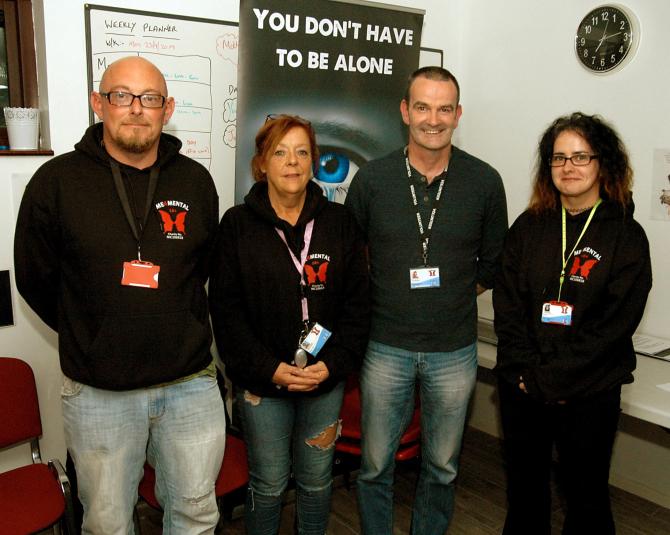 MENTAL health impacts our emotional, psychological and social well-being.
It takes real strength to admit you need help, whether it’s you or someone you care about is struggling with mental health issues, but asking for support is the first step towards getting better.
In Limavady town, dedicated volunteers from a mental health and suicide awareness charity have officially launched a support group that aims to encourage open discussions around this taboo subject and provide a beacon of hope for those with mental health conditions, no matter how bad things may seem.
Last Monday evening, curious members of the community gathered for the official launch of the Me4mental support group which took place at the Bovalley Community Association, Drumachose Park.
The support sessions will be held at this location every fortnight, commencing Monday September 30.
Based in Derry/Londonderry, Me4mental is a registered charity with an open door policy that provides a range of mental health services including; Listening Ear Service, Mental Health Advocacy, support and advice with regard to services available in the local area, one to one appointments available on request and a Quiet Room available for thought and reflection.
The charity also provides online information and support to a world-wide audience and currently runs two mental health peer support groups around Derry/Londonderry which now includes Limavady town.
Following the launch, one of the facilitators for Me4Mental, John Doran, spoke to the Northern Constitution saying: “It went really well.
“It was a generalised information evening on what we do, what the support group will involve each week and it also gave the public a chance to ask questions.”
John continued: “The group is for anyone suffering from mental health or anyone with family members in need of our support.
“The health service waiting lists are pretty substantial but most of the time maybe that's all the person needs is a support group or someone to talk to without judgement.
“Everyone in Me4Mental is a volunteer and has either suffered or has family members who suffer from mental health conditions.
“At the end of the day, our aim is to help people deal with mental health and see that there is light at the end of tunnel.”
Founder and Chairperson of Me4Mental, Patricia Flanagan McClean told the Northern Constitution: “Me4mental was set up In Derry/Londonderry three years ago with the aim of supporting those with mental health conditions and also to support family and friends.
She continued: “We have been successful in our current location in 18a Queens Street and have been asked numerous times to provide our service in Limavady, so we listened and brought our services to them.
“We encourage everyone who is finding things hard or suffering from poor mental health or even a family member or friend who wants help for their loved one to attend our groups.
“It will be a friendly and relaxed environment by two of our friendly facilitators.
“Let us be there for you.”
Also in attendance at the support group launch were three delighted winners from the recent Miss Shining Light competition, Patricia Mullin, Kerry Clarence and Taylor Nicholl.
Founded by Jennifer Taylor and Emma Brolly, 'Miss Shining Light' is an inclusive charity pageant which supports Me4Mental, raising awareness and much needed funds for mental health.
Winner of Junior Miss, 12-year-old Taylor Nicholl told the Northern Consitution: “I was surpised and shocked when I found out that I had won.
“The competition was great because I made new friends and I enjoyed meeting new people.
“I loved doing the catwalk and I really feel that the pageant helped to boost my confidence.”
Winner of Miss Charity Shining Light, Patricia Mullin spoke of her experience entering a pageant which is close to her heart saying: “I am absolutely over the moon and truly honoured.
“The work of the Pageant raised a total sum of £11,500 for Me4Mental a completely deserving Charity Organisation.
“I achieved my crown by fundraising £2,325 of that in my own time before the pageant.”
She continued: “I want to thank each and every single person from the bottom of my heart for their donations and their time given to this venture.”
Patricia went on to say: “Me4mental coming to Limavady and providing support for the members of our community who are in need will greatly help our community as Limavady is presently lacking in mental health support services.
“From meeting with several of the Me4mental volunteers and the Co-founders I can honestly say that these people are there for us.
“Your wellbeing and safety are paramount in their services which are about real people helping real people.
“I can get behind and back this organisation and I truly believe they will do wonderful things for those in our community here in Limavady.”
Winner of Exquisite Shining Light, Kerry Clarence praised the work of the charity and welcomed the support group which she believes will be beneficial for the town: “I entered the competition to raise awareness for Me4mental and I received so much support, it was just great.
“I put my heart and soul into the pageant so I cried from deep down when I heard my name being announced. It meant so much to me and it was such an incredible experience.”
She continued: “The launch went really well – the committee members offer so much to the community and it's all voluntary which is amazing as you know they are doing it from the heart.
“It's going to be phenomenal for Limavady to have a service like this on our doorstep.”
The Me4mental support group will take place on a fortnightly basis, commencing Monday September 30 from 7-9pm at the Bovalley Community Association, Drumachose Park.
If you would like to contact Me4mental you can do so on: 02871413050 or by email: info@me4mental.com