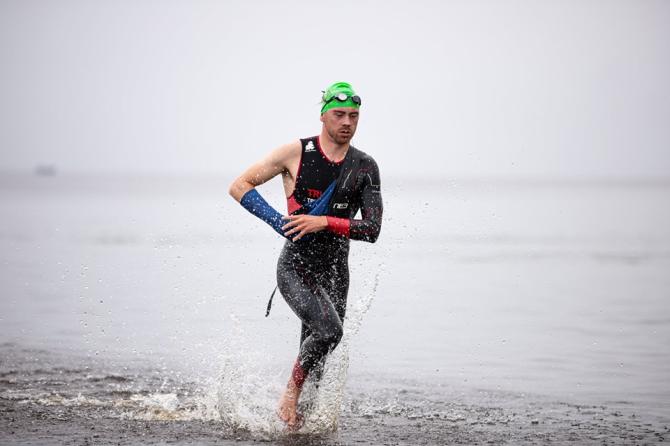 23-year old James Walton, from Ballerin, will look back on his 2019 season with a great deal of satisfaction knowing that he will now be rightly recognised as one of the top performing triathletes on the Island of Ireland.
A member of Triangle Triathlon Club, which has bases in Limavady, Coleraine and Magherafelt, James has attained a wealth of experience when it comes to standing out in Triathlon Ireland competition.
To his credit this year, James has gathered supreme finishes in several competitions both locally and nationally.
James' first win of the 2019 season came in early June when he romped home in the Crooked Lake Triathlon in Camlough, County Armagh.
This was soon followed by first place finishes in the Causeway Coast Olympic Distance and the National Aquathon Championships in Dublin Bay's Bull Island to create an early summer hat-trick of heroics for the indefatigable Ballerin man.
In the National Standard Distance Championships in Wicklow, Walton was able to garner a fourth place finish in his age grouping which was then coupled with a second place finish in the Two Provinces Triathlon race in mid July.
August saw a return to winning form for James as he was able to give a salubrious performance to collect the first place medal at the Lough Neagh Triathlon.
Back on the national stage, the National Elite Sprint Distance Championships gave Walton another opportunity to display his abilities. He delivered as expected gathering a second place finish, only narrowly missing out on the first place prize.
The year was then capped off for James with a further overall first place finish at the Castlewellan Triathlon in late August to finish off the 2019 campaign on a deserved high.
Alongside his athletic ability, academics too plays a major role. James is a part-time student at Leeds Beckett University where he is currently working towards completing a Masters in Sports & Exercise Physiology which will only prove beneficial for his future sporting endeavours.
James said “It ended up being a good season for me, I'm pleased. Next season it may slow down a bit, I'm working towards my Masters degree which will probably take up a lot of my focus. I'll still be taking part in competition in Ireland and hopefully in England too though where I hope to build on what I was able to do this year.”
When asked about his moves in the future and James said, “I'd like to do more Half-Iron Man distance competitions. It's a challenge which I know will be tough but is something I would be excited to do.”