Dominant second half display sees Roesiders through in Cup 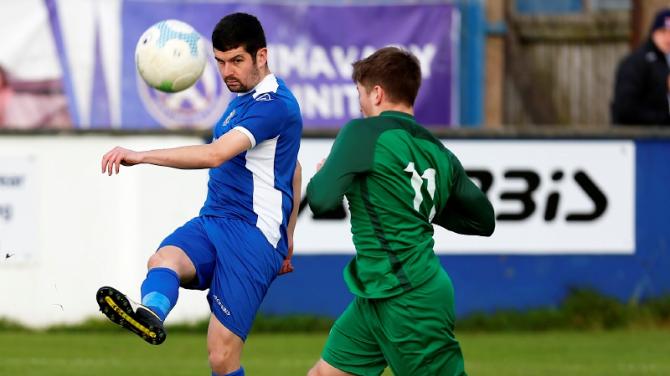 LIMAVADY United gathered another win this time coming in the third round of the Irish Cup where three second half goals secured the team's progression in Ireland's oldest competition.

The first half proved to be a dogged affair and was tight for the opening 10 minutes.

The first real chance came in the 12th minute when Jack Devenney whipped in a troubling cross but the resulting shot whizzed over the crossbar.

Six minutes later in the 18th minute Limavady missed a golden opportunity to take the lead after a corner led to a scramble in the penalty area with Aquinas goalkeeper, Jack McCrea sturdily saving an awkward snapshot.

Limavady were creating most of the chances but were having trouble finishing off the chances.

Dean Brown looked like he was straight through on goal after a long ball but was swiftly tracked by the Aquinas defender and the ball was well cleared.

In the 27th minute The Roesiders had their best chance of the game to break the deadlock when Dean Brown got on the end of a cross and headed onto the crossbar before the goalkeeper was able to recover the rebound.

The sides went in scoreless at half-time but Limavady seemed better equipped to come up with goals in the second period.

The first goal of the game came in the 65th minute when Dean Brown played an over the top ball into Sean McCarron who duly obliged and slotted home with a calm finish to give Limavady the lead.

With renewed confidence from the goal, Limavady United began piling the pressure onto the Aquinas defence.

Dean Brown had a great chance to extend the lead a minute after the first goal but just narrowly missed.

In the 68th minute the unrelenting pressure was too much for Aquinas to withstand. Ryan Doherty made the score 2-0 when he beat three Aquinas defenders then slipping the ball into the net for a great individual goal.

In the 75th minute Sean McCarron was able to return the favour to Dean Brown with an assisted pass leading to a placed shot which gave the 'Roesiders' a three goal advantage.

The home side appeared to have superior fitness to the South Belfast men and this led to an assured level of control in the final stages of the game.

Limavady had further opportunities in the closing phase to add more goals with Gary McFadden and Dean Browne coming close but 3-0 would be recorded as the full time scoreline.

Limavady United head coach, Mark Clyde reflected on his team's performance after the match. Clyde said: “I'm pleased that we're moving on to the next round. Our performance was OK but the squad has still loads of room to improve.

“We have spoken a lot about raising our standards and demanding more from each other on a more consistent basis so this is what we are working on.”

After several weeks off from league action due to a number of cup fixtures, Mark is hopeful that the squad can climb the table.

He added: “It will be good to get going in the league again and we are looking forward to it.

“It won't be an easy game but we have to take confidence from the Irish Cup result and build on it against Banbridge next Saturday.”

“In terms of climbing the table, another win will hopefully move us up a few places which is always good and with teams at the top beating each other the league could be very tight this season.”