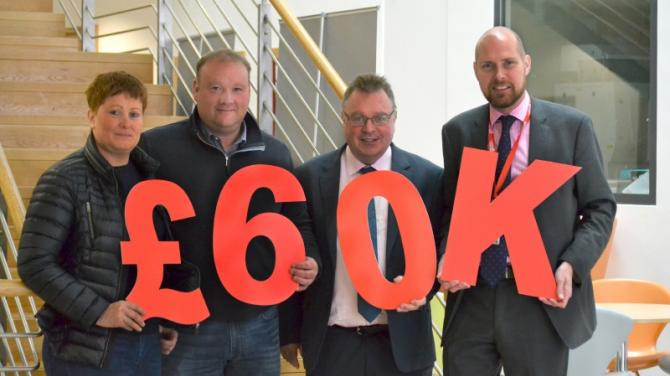 ONE year after finding a suspicious small lump, Limavady sheep breeder Julie Loughrey has raised a whopping £60k for breast cancer research while highlighting the importance of getting a doctor check.

In May last year farmer Julie found a small lump, and after being red flagged by her doctor she was diagnosed with breast cancer within a fortnight.

At the age of 43 Julie was seven years away from her first scheduled NHS mammogram.

All females are sent for a NHS mammogram aged 50 and Julie wants to raise the importance of not waiting if you are worried.

In June this year husband and wife team Julie and Graham Loughery, along with the help and support of their family and friends, held a charity BBQ, auction and stock judging night on their Terrydoo farm.

This event along with numerous donations, raised a staggering £60,200 to support breast cancer research at the Centre for Cancer Research and Cell Biology (CCRCB) at Queen’s University Belfast.

Donations flooded in from friends, family and the farming community, especially farmers at Ballymena Livestock Market where Graham works as an auctioneer.

Generous support was also shown from different societies which Graham and Julie have connections with.

Now, through chemotherapy and a mastectomy Julie is ‘loving life again’ and would like to highlight the importance of self checking to both men and woman, and hopefully her story raises awareness and saves lives.

Julie said: “Thanks to the staff and surgeons at Altnagelvin Area Hospital I am feeling fit, healthy and able to live life again as I did before.

“The kindness, care and attentiveness I have received has been second to none.

“The fun and hard work organising the BBQ has been so fulfilling to know that I am helping others battling this disease by supporting research into new treatments, hopefully doing away with surgery and chemo in the future – which is so rewarding.

“My surgeon Mr Padraig Diggin recommended the Queen’s Foundation, and in particular the breast cancer research that is carried out at the Centre for Cancer Research and Cell Biology at Queen’s University, Belfast.

“One hundred percent of the money raised going directly into research in Northern Ireland.”

Julie continued: “I had hoped the BBQ would raise a substantial amount, and in return everyone would have a great night out.

“We have been absolutely blown away by the generosity towards our efforts to raise money for CCRCB.

“Without the help and support of friends and family it would not have been possible.

“I had a team of helpers who worked tirelessly along side me for the months running up to the BBQ, making our sheep shed ready, selling tickets, collecting auction prizes and much much more.

“Our thanks goes out to all that helped make the night a success.

“On the night again friends and family worked tirelessly barbecuing for a crowd of 700 people.

“99 percent of the food was donated by butchers and producers from near and far.”

Tickets, portaloos and even a chocolate fountain were all kindly donated by local businesses for the event, all in aid of cancer research.

A fabulous auction was held on the day which raised an amazing £28,000 alone.

Julie added: “Auctioneer William Blackburn conducted the auction which seen 80 lots go under the hammer, such as hotel vouchers, shepherds crooks, football/rugby shirts, weekends away to name but a few.

“People came from all over the country, England and Scotland too.

“There was something for everyone, food, dancing, music and even a bouncy castle and rodeo sheep for the kids.”

Julie was delighted to be able to visit CCRCB and see what the researchers at Queen’s are doing, so that she can tell everyone who supported her what a difference their donations are making.

The Queen’s University of Belfast Foundation is the registered charity of the University.

Established in 1999, the Foundation has engaged supporters to change lives by funding medical research, such as cancer and by supporting students to realise their full potential through scholarships and prizes.

Many of these projects would not happen without the commitment of supporters.

Dr Stuart McIntosh, Consultant Breast Surgeon and Clinical Researcher at CCRCB said: “It is due to donations from donors like Julie and her husband Graham that we are able to carry out the ground breaking work we do into breast cancer research at Queen’s.

“The money raised will be used to support a three year PHD Student who wilI carry out breast cancer research.

“I would like to express my personal thanks to everyone who supported them raise this significant amount.

“Due to our research new tests developed help decide which therapies will work for which patient therefore helping to personalise breast cancer treatment.

“Supporters like Julie can help us develop new treatments faster and change the lives of women with breast cancer and their families.”

Graham and Julie would like to take this opportunity to thank everyone for their donations and help raising this enormous amount of money for such a worthy cause.