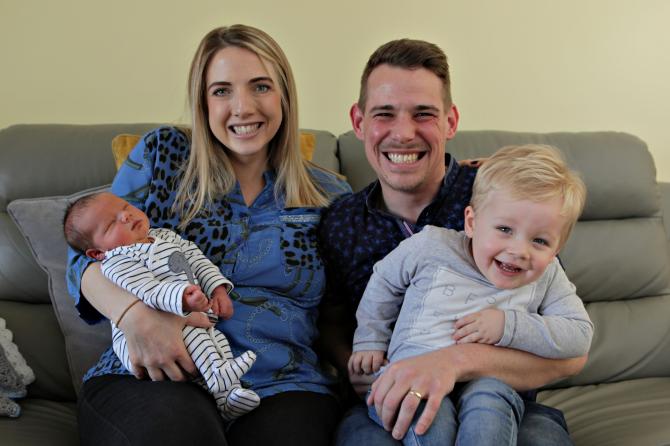 Baby Harry, first born in the new decade within the Northern Trust area on New Year’s Day. Here he is pictured with mum Nadine, dad Craig and brother George. WK2KC01

LAST Wednesday marked the start of a new decade and with that came the arrival of the borough's first new born, Balnamore's newest baby boy Harry Justin Thomas Kane.

Mum Nadine and father Craig were overjoyed as they welcomed their second son into the world at 8.29am on New Year's Day. Baby Harry weighed 8lb 14oz whilst Lex weighed 8lb 1oz and both boys have been described by their doting mothers as a New Year's Day ‘bundles of joy.’

Both Nadine and Carly were due to give birth on Christmas Eve. However, new arrivals Harry and Lex obviously felt the time was not suitable to make an appearance meaning their mothers had to wait an extra eight days before giving birth.

The ladies are past pupils of Coleraine High School and Carly gave us a little bit of an insight into the incredible story of how the best friends gave birth on the same day.

*Read the full story inside all our editions this week.